English Premier League club West Ham United has signed up with daily fantasy soccer site Mondogoal as part of the former’s first foray into the world of fantasy sports. The inclusion of West Ham adds to a growing list of top-tier teams that have collaborated with Mondogoal, including Manchester City, Liverpool and AS Roma. 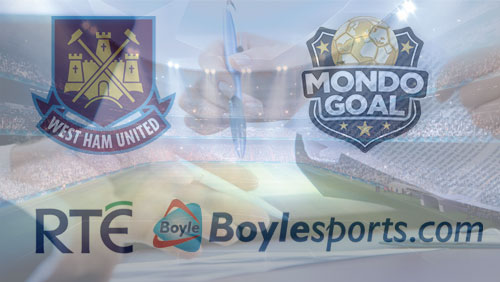 “We are excited to add one of England’s most historic teams, West Ham United, to our roster of clubs in partnership with Mondogoal,” Mondogoal CEO & Founder Shergul Arshad said in a statement. “West Ham has embraced the true Mondogoal experience and is excited to take this to its passionate fans in ways that we think will be creative and ground breaking.”

Mondogoal is the daily fantasy soccer equivalent of site like FanDuel and DraftKings, which caters to daily fantasy football, basketball and hockey games.

With West Ham in the fold, the team and its fans can now take advantage of the growing popularity of daily fantasy games. “Gaming has been an extremely popular category for West Ham fans and we believe this innovative platform that combines the fun of fantasy football with a daily format for free or cash play will catch on with our fans,” West Ham United Head of Commercial Felicity Croft said.

In other sponsorship news, Ireland’s biggest independent bookmaker has signed a partnership deal with network RTE Sports to sponsor its coverage of horse racing spread across various media outlets, including TV, radio and online.

“We already sponsor many of Ireland’s most significant racing fixtures but to continue to be successful those fixtures must benefit from broadcast coverage,” Boylesports CEO John Boyle said.

“That is why this partnership is important, not only for RTÉ and Boylesports, but for the future of Irish racing. This deal cements our place as Ireland’s number one bookmaker in terms of monetary contributions towards Irish racing.”

As part of the sponsorship, Boylesports will receive access to RTE’s platforms to endorse Irish Racing while at the same time promote its own betting products to a bigger horse racing audience. Boylesports’ deal with RTE also follows its long-standing commitment to promoting Irish racing. In addition to this new partnership, Boylesports already has sponsorship deals with the Irish Grand National and the Boylesports Irish Greyhound Derby.