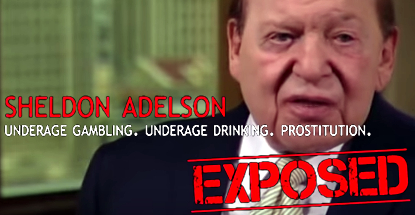 The rank hypocrisy of Sheldon Adelson’s war against online gambling has been further exposed in a hilarious new video.

The video, a teaser for the new TheTimJamesShow.com (episode 1 of which will debut on August 19), takes aim at the demonstrably false claims made by the Las Vegas Sands chairman and his Coalition to Stop Internet Gambling (CSIG) regarding online gambling’s alleged inability to prevent access by underage gamblers.

Adelson’s hypocrisy on this issue was already well established given the number of times his brick-and-mortar casino properties have been fined for allowing underage patrons access to gambling and alcohol.

But James’ video offers further proof by using hidden camera footage of not one but two underage associates gaining access to Sands’ Las Vegas properties the Venetian and Palazzo, where they buy chips, gamble, cash out their winnings and enjoy a cocktail or twelve.

Even better, James partakes in one of the Palazzo’s unadvertised perks via the company of a comely working girl, who proceeds to reveal that has done “ungodly amounts” of deals at the Venetian. She goes on to say that the reason for her presence is well understood by the casino’s bartenders, dealers and security, yet they choose to look the other way.

The hooker with a heart (and wallet) of gold goes on to say that she plies her trade at the Palazzo because it’s where the rich guys hang. (Our own Calvin Ayre notes that James appears to have stumbled upon the Willie Sutton of hookers.) The situation is indeed a bit rich, given Adelson’s vehement denials regarding ‘prostitution strategies’ at Sands’ properties.

James caps off his video by demonstrating the comparative difficulty his underage compadres have in registering and playing on Caesars Interactive Entertainment’s Nevada-licesed WSOP.com online poker site. James wryly notes that he had no luck attempting to secure the services of a prostitute via WSOP.com – which could be why it has such little traffic, but we digress. Meanwhile, cue up the schadenfreude and enjoy the video.