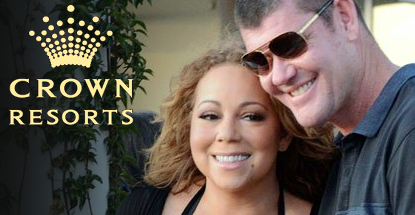 James Packer is stepping down as chairman of Australian casino operator Crown Resorts after the company delivered a “mixed” fiscal year report.

Packer will retain a seat on Crown’s board and will eventually be named senior Executive Director. Packer will also continue as co-chairman of the Melco Crown Entertainment joint venture and the Alon Resort project in Las Vegas.

Packer said Crown remained his “number one business priority and passion” and, when he’s not squiring new squeeze Mariah Carey around town, he intends to spend the majority of his time “completely focused” on Crown’s “pipeline of resorts globally.” Of these, “no project is more important to me” than the in-development six-star VIP-focused Crown Sydney.

Crown’s domestic properties reported normalized revenue up 14% to $3.2m, as VIP turnover rose nearly 42%. The company said this was the result of having dedicated additional resources to VIP international marketing following the elimination of the ‘Super Tax’ on VIP gaming at Crown Melbourne and the tax rate reduction from 12% to 9% on VIP play at Crown Perth.

Crown’s one-third stake in Melco Crown’s profits fell 57.6% to A$122m, reflecting the overall decline in the Macau casino market as well as costs associated with the launch of the new City of Dreams Manila resort this spring and preparations to open Studio City in Macau this October.

Crown’s online sports betting businesses, Betfair Australasia and the new CrownBet joint venture, lost A$16m on revenue of A$90m. Beyond that, details were scarce, save to say that CrownBet’s turnover was “in line with expectations, given the start-up nature of the business.” Betfair’s results were similarly in line with expectations.

Crown also revealed that it had paid US $27.5m last month for a 60% interest in Texas-based social games developer DGN Games. Crown has provided a further US $5m to fund DGN’s growth.