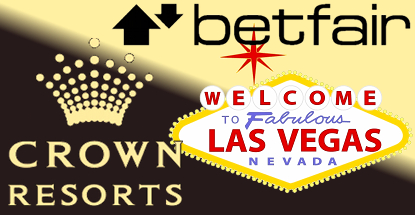 Australian casino operator Crown Resorts has assumed full ownership of the operations of Betfair Australasia. The down under operations of the UK-based betting exchange were already 50% owned by Crown when the joint venture was formed in 2004, but the casino firm has now splashed out $10m to acquire the UK partner’s half of the business. However, Betfair will continue to provide technology and support services to the Australasian unit. The Betfair business generated a net loss of $1.8m in Crown’s recent H1 earnings report.

Crown has also confirmed its purchase of a vacant property on the Las Vegas Strip. Crown says it paid $280m for the 34.6-acre lot on which the New Frontier casino once stood, Crown has teamed with hedge funders Oaktree Capital, which acquired the property on the cheap from the Elad Group in 2011, and former Wynn Las Vegas president and Playstudios founder Andrew Pascal on a joint venture to develop the property.

The JV partners reportedly hope to build a venue similar to the planned VIP-focused Crown Sydney casino, which is set to open in 2019. However, the Vegas property is targeting a 2018 launch date, leaving little time to waste. The JV partners are reportedly considering a public floatation in order to help fund construction of the as-yet unnamed property. Crown’s development pipeline – on its own and via its Melco Crown Entertainment JV – is already busy with projects either in development or proposed in Sydney, Brisbane, the Philippines, Macau, Sri Lanka and Japan.

Meanwhile, the regulatory approval of Crown Sydney has been described as “one of the fastest assessments of a casino applicant in history.” Micheil Brodie, CEO of the New South Wales Independent Liquor and Gaming Authority (ILGA), made the comment during his keynote address at the Gaming, Racing & Wagering Australia conference in Sydney. Brodie said the three-month process of approving Crown was about one-quarter the time the ILGA spent approving Sydney’s other casino, Echo Entertainment’s The Star. Brodie’s comments won’t cheer critics who already felt the NSW gov’t had bent over backward in order to realize Crown’s Sydney ambitions.