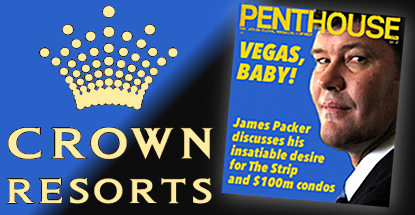 Let it be said, Crown Resorts boss James Packer doesn’t give up easily. Bloomberg is reporting that Packer is working on a deal to acquire a parcel of land on the Las Vegas Strip. Packer has reportedly claimed 10% of the debt held by Oaktree Capital on the ground on which the New Frontier Hotel & Casino once stood (directly opposite the Wynn Las Vegas). Oaktree and other creditors acquired the property after Israel’s Elad Group abandoned its plans to build a $6b Plaza Hotel-branded venue on the vacant lot in 2011.

Packer nearly teamed with Wynn on a joint bid to acquire the New Frontier property in 2007, but the Elad Group beat them to the punch. A couple months ago, Crown was tipped as one of the frontrunners to acquire the troubled Cosmopolitan of Las Vegas, which was ultimately sold to private equity firm Blackstone for $1.73b. Crown’s apparent determination to establish a foothold in Vegas is all the more impressive given it is still dealing with the legal fallout from its failed Fontainebleau Las Vegas project, which collapsed after the global economy took a nosedive in 2008.

Meanwhile, Packer’s Crown Sydney project is making headlines after it was revealed that the property could soon boast Australia’s most expensive lodgings. A three-storey penthouse that will cap the 69-storey hotel-casino tower in Sydney’s Barangaroo district could sell for as much as $100m, which would not only make it the most expensive domicile in Australia but would also mark the country’s first privately held property to top the $100m valuation.

Earlier this week, Chris Wilkinson, founder of the Wilkinson Eyre architectural firm that is designing the Crown Sydney project, told reporters that current plans have the tower’s top three storeys “as one apartment.” Crown is reportedly debating selling the penthouse as a private residence or reserving it for the highest of the Asian high rollers Crown’s new casino is intended to attract when it opens in 2019. A sale for $100m would allow Crown to immediately recoup the money it has already provided the New South Wales government for the casino license.