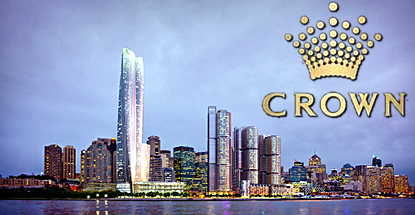 Australian casino operator Crown Resorts has received official approval to proceed with its $1.5b VIP-focused casino and six-star hotel in Sydney’s Barangaroo district. The Crown Sydney Hotel Resort complex is scheduled to open for business on Nov. 15, 2019, which will end the longstanding monopoly currently enjoyed by Echo Entertainment’s The Star, who waged a fierce campaign to keep Crown on the outs. The only remaining hurdle Crown now needs to clear is planning approval.

Crown Sydney’s restricted license will prevent it from offering video poker (pokies) machines. The upscale joint will also feature minimum table bet limits to keep out the riff-raff and access will be limited to members and their guests. However, the casino’s high-rollers will be allowed to smoke, once the necessary air-filtration systems are installed in the VIP rooms.

In return for a 99-year lease on the property, Crown has agreed to pay the New South Wales government $95m within five business days, on top of the $5m deposit it forked over last year. Crown CEO Rowen Craigie trumpeted the 1,200 jobs and “significant economic growth” the new facility would create for NSW.

However, Crown will be entitled to unspecified compensation should the NSW gov’t increase gaming taxes in Crown Sydney’s first two decades of operation or if NSW amends its license for any reason other than the casino breaching the terms of its license.

There were concerns that Crown chairman James Packer’s public brawl on the streets of Bondi with Nine Entertainment CEO David Gyngell this May might lead the Independent Liquor and Gaming Authority (ILGA) to conclude that Packer lacked the moral fiber to run a casino in NSW. But on Tuesday the ILGA said ‘boys will be boys’ and declared Packer and his fellow Crown execs to be fit and proper operators.