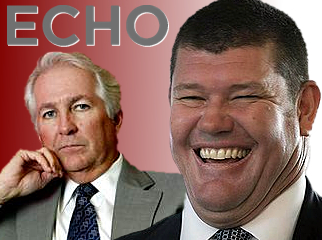 John Redmond (pictured right, on the left), CEO of Australian casino operator Echo Entertainment, has broken his silence on the allegations that he passed out drunk in a bar inside Echo’s The Star casino in Sydney. Redmond, who was investigated and cleared of any wrongdoing by Aussie gaming regulators, described the “false” and “ridiculous” allegations as the work of “others” seeking to undermine Echo’s bid to gain an extension on The Star’s Sydney casino monopoly past its 2019 expiry date. Redmond directly accused rival operator Crown Ltd. – which is seeking a license for a $1b VIP-focused casino in Sydney’s Barangaroo development – of running a destabilization campaign intended to queer Echo’s bid.

Redmond says the alcohol allegation is but one example of Crown’s efforts to generate skepticism regarding Echo’s proposal to embark on a $1b expansion of The Star into a fully fledged integrated resort. Redmond pointed to Crown boss James Packer’s decision to sell his 10% stake in Echo at a loss and Packer’s public comments that the sale had left Echo little financial wiggle room. Packer said Echo “were relying on me to pay for their plan. Let’s see how they go paying for it themselves.”

Redmond told The Australian that when he joined Echo, he was given Aussie journalist Paul Barry’s book detailing Packer’s no-holds-barred business tactics. Redmond said Crown and Packer “have a record” and that “when you look at what is going on now, it just seems to be their MO.” Redmond said the allegations about him passing out in the bar were made in internal company emails, but he believes “it takes others to bring that information forward and make it into a whole character assassination.” A Crown spokesman responded by describing Redmond’s “disappointing” comments as “desperate tactics” that Crown “totally reject.”

ECHO KEEPS UP MEDIA PRESSURE
Both Echo and Crown have until Friday, June 21 to submit their competing bids to the New South Wales government committee tasked with making the Sophie’s Choice on whose Sydney casino proposal gets to live. In the meantime, Echo is going forward with a newspaper ad campaign promoting its bid, ignoring pleas by NSW premier Barry O’Farrell for both parties to shut their gobs and let the committee do its work. Redmond justified the newspaper spend as necessary to “respond to the pressure we were getting from the public to disclose our plans,” not as an attempt to “try and influence the outcome of the process.”

Crown, meanwhile, is minding its P’s and Q’s, saying that it would respect O’Farrell’s wishes and refrain from any more advertising. Packer’s cozy relationship with O’Farrell’s government – David Murray, the man heading the NSW casino committee, was a guest at Packer’s wedding – has led many onlookers to conclude that Crown had the inside track to win the Sydney derby. Murray’s committee is expected to take no more than a month to announce which casino plan would get the nod.