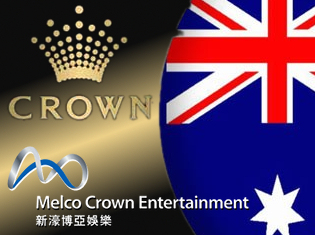 Australian casino operator Crown Resorts Ltd. reported a dearth of VIP gamblers at its domestic resorts but the continued success of its Macau joint venture helped buck up the company’s H1 results. Revenue in the six months ending Dec. 31 was up 3.4% to A$1.56b (US $1.4b) while normalized (adjusted to smooth out variance in VIP gambling win rate) net profit after tax rose 29.4% to A$315m. Actual net profits were up 64.3% to $382.5m before significant items, including a $75m charge on the loss-leading sale of Crown’s stake in rival casino operator Echo Entertainment.

Crown’s other investments weren’t anywhere near as bountiful. Crown’s 50% stake in Betfair‘s Aussie operations generated a net loss of $1.8m, while Crown’s 50% stake in UK casino outfit Aspers Group returned neither profits nor earnings. Crown also revealed that it had invested US$22.6m in Caesars Growth Partners, the spinoff of US casino operator Caesars Entertainment that contains its online gambling and social gaming operations. (Other notable CGP investors include heavyweights George Soros, John Paulson and Leon Cooperman.)

Looking forward, Crown is still waiting on the New South Wales government to formally issue Crown’s proposed Sydney casino a gaming license. MCE’s development program is much more advanced, with the new Studio City casino on Macau’s Cotai strip on budget and on track for a mid-2015 opening and City Of Dreams Manila set to open later this year in the Philippines. Crown’s report made no mention of its efforts to secure the rights to build a resort casino in Sri Lanka’s capital Colombo.