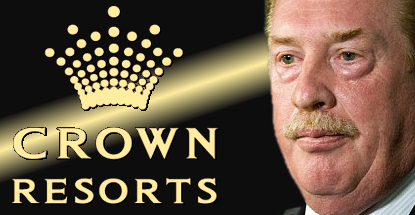 Australian casino operator Crown Resorts has refuted media suggestions that it was considering selling the three-storey penthouse that will sit atop its Crown Sydney casino-hotel tower. Earlier this week, project architect Chris Wilkinson of Wilkinson Eyre told reporters that the top three storeys of the 69-storey Crown Sydney would consist of “one apartment,” which led Fairfax Media to suggest the casino operator might look to sell it as a private condo for as much as $100m, the same amount Crown recently paid the New South Wales government for its 99-year lease on the property.

Crown Resorts felt compelled to answer these rumors by clarifying that the tower’s top three floors would be kept within the Crown fold for use by its “most prized international VIP customers” which is casino shorthand for Chinese gambling whales with money to burn (or money to borrow and never repay). Crown Sydney is scheduled to open in 2019.

Meanwhile, Crown Melbourne security was recently compelled to forcibly evict the former premier of Tasmania from its premises over still disputed antics. Paul Lennon (pictured), the 58-year-old ex-premier who resigned his post in 2008, has confirmed that he was ejected from the Crown casino on the night of July 24, for which he received a $738 ticket for failing to leave a licensed premise.

Media reports quoted witnesses saying Lennon had to be dragged out of the casino by five or six security guards who eventually felt the need to bind Lennon’s hands with cable-type handcuffs. Lennon was said to have loudly asked the guards if they knew who he was, a seemingly fatal utterance for anyone in the public eye. Witnesses claimed the melee ignited after Lennon acted ‘aggressively’ towards a woman who touched his casino chips and refused to leave the premises when so ordered.

Lennon disputes this description of events, saying he was asked to leave after licking his finger before touching a playing card at his poker table. Lennon claims to have been unaware that this finger-licking-bad behavior was against casino rules and that he wasn’t informed of this fact until after his ejection. Lennon claimed he was the one who called for police after casino staff refused to explain their decision to oust him. Lennon said he consumed no alcohol during the game but it’s likely he’s enjoying a few stiff shots after seeing his mug splashed across the Australian media’s front pages… again.

Lennon and Crown previously made headlines in 2006 when it was revealed he’d enjoyed a comped stay at a six-star suite at the casino mere days before Betfair Australia – in which Crown holds a 50% stake – received its Australian betting license from the Tasmanian government. Lennon eventually resigned his premiership and his Labour party seat in Franklin following widespread allegations of corruption that drove his approval rating down to 17%.