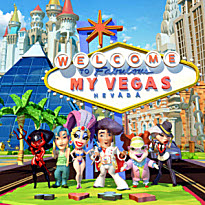 More details are emerging on MGM Resorts‘ new online social casino offering. Originally previewed to the world under the working title ‘Casino Mogul’, the myVegas Facebook app is currently in closed beta mode ahead of an expected launch this summer. To build myVegas, MGM has teamed with developer Playstudios, a company founded by Andrew Pascal, the former Wynn Resorts and WagerWorks exec. Playstudios was previously known by the ‘stealth name’ Incubet, which was the company attributed to Pascal when he was appointed to the Nevada Gaming Policy Committee in January. (Also on the committee? MGM CEO Jim Murren. Convenient, that.)

VentureBeat recently published an interview with Pascal, in which he revealed the ‘marketing partnership’ with MGM gives Playstudios exclusive social and mobile gaming rights to MGM’s Las Vegas properties, including the Bellagio, the Mirage, MGM Grand, etc. In addition to slots (some in 3D), blackjack and other casino games, players will be able to construct their own fantasy version of the Las Vegas Strip – much like a CityVille or Sim City type game – which they can populate with their social friends. Players also earn points toward loyalty prizes, including amenities at real-world MGM properties. For the moment, Pascal says Playstudios is “focused on virtual currency-based social goods gambling. A lot of people are very excited about for-cash gambling as an opportunity. It is an enormous prize when it gets sorted out. Everyone will position themselves for it. But having been in that business, I fully appreciate its complexity.”

This complexity was a hot topic at the Social Gaming Summit in Berlin this week. While everybody’s touting the vast riches to be had from social gaming’s eventual conversion to real-money play, such a move is not without pitfalls. Chief among them would be the fact that, unlike online gambling companies, social networks like Facebook offer access to kids as young as 13, meaning regulatory scrutiny would be intense, whether in Japan or in ‘won’t someone think of the children’ America. Julien Codorniou, Facebook’s head of European partnerships, told Gambling Compliance there was “too much money in free-to-play games” for the company to consider going the real-money route. “The margin in online gambling is so low. On virtual chips, it’s 100% – 70% after Facebook takes its portion.” Ah, yes. Just like America benefits from owning the presses that print the world’s reserve currency, Facebook certainly enjoys its role as the sole issuer of Facebook Credits.

While some attendees felt Codorniou’s stated aversion to real-money play may have more to do with the company’s unwillingness to tip its hand as to its real plans, Joost van Dreunen, managing director of New York-based SuperData Analytics, suggested the company wants to steer clear of potentially controversial products that might result in more mainstream companies withholding their advertising dollars. “The last thing they want to do is do something polarizing. There’s never going to be a casino section – a red light district – on Facebook. It’s just not in the nature of the company. They have to be wholesome.”