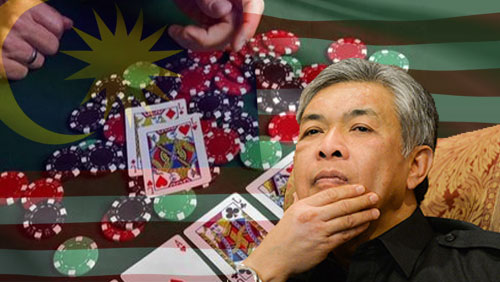 “For the past four months, we have flushed out illegal gambling dens under the ‘Op Cantas Khas’ operation, but it has reared its ugly head again, “said Zahid.

Hamidi got involved in a controversy when he wrote a letter to Deputy FBI Director Mark Giuliano refuting claims that Paul Phua was associated with the 14K Triad, allegations the FBI had made in court filings during Phua’s arrest in Las Vegas for illegal sports betting.

Hamidi had also informed the FBI that Phua had, on numerous occasions, assisted the government of Malaysia on projects affecting national security.

Following criticism, Hamidi said the letter was not meant to defend Phua but to clarify the status of Phua and the existence of the 14K triad in Malaysia.

Meanwhile, Malaysia-based electronic gaming manufacturer RGB International Bhd has deferred plans to enter the gaming sector in Timor-Leste (East Timor) due to delays in license allocation, the company said in a filing with the Malaysian Stock Exchange.

RGB International was supposed to acquire a 30% stake in electronic gambling operator Timor Holding Ltd (THL) but the company decided to wait until Timorese authorities granted a gaming license.

“The RGB International board of directors, after considering all relevant aspects, is of the view that termination is in the best interests of the group,” it said, adding that the initial payment of US$214,000 delivered in 2014 at the signing of agreement had been returned.