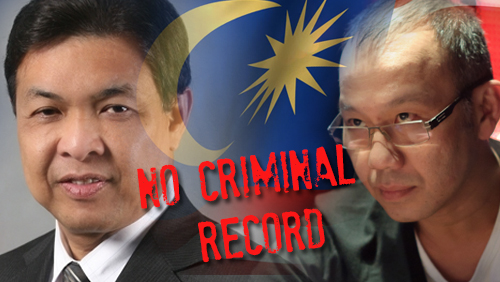 Home Minister Ahmad Zahid Hamidi yesterday denied reports that Wei Seng ‘Paul’ Phua has ever been convicted of a crime in Malaysia.

“According to police records, Paul Phua Wei Seng does not have past criminal record,” Zahid said in a written parliamentary response to Puchong MP Gobind Singh Deo.

In January, independent news outfit Malaysiakini reported that Phua had been arrested in Sarawak, Malaysia in 2004 and convicted for his involvement in an illegal betting scheme during the European Championship soccer tournament. Phua was reportedly slapped with a hefty fine and left the country soon after his conviction.

The report also said that Phua was even barred from re-entering the country during the World Cup in 2008.

Zahid has been linked to Phua after he wrote a letter to the FBI declaring that Phua was not a member of the Hong Kong 14K triad and that Phua had helped Putrajaya in national security projects.

The minister later defended his decision to write the letter, saying it was done within his powers as home minister.

Zahid also added that he could not reveal why he wrote that Phua was assisting Putrajaya on security matters, adding that the letter was written following a request by Phua’s legal representatives at Shafee & Co.

In March, Malaysian Minister Datuk Seri Shahidan Kassim told DAP MP Lim Lip Eng that “the government has no plans to reveal any information related with Phua Wei Seng as it is a huge secret and classified under the Official Secrets Act 1972.”

Lim pointed out that he had not sought to find out the content of the national security “projects” that Phua was involved in, but merely wanted to find out how many times Phua had contributed to the country in such matters.

“To me, that is not national secret. Nothing to do with national security. It will not jeopardize the peacefulness of our country,” Lim added.

Paul Phua has prior conviction in Malaysia
Criz Hombrebueno
28 January 2015
.