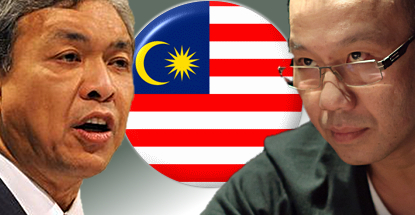 Midway through December, the South China Morning Post reported that Malaysia’s minister of home affairs Ahmad Zahid Hamidi (on the left) had sent a letter to Deputy FBI Director Mark Giuliano refuting claims that Phua is associated with the 14K Triad, allegations the FBI had made in court filings.

Hamidi’s letter said his government believes Phua “is neither a member nor is he associated with the 14K Triad. Furthermore, Hamidi said Phua had “on numerous occasions assisted the government of Malaysia on projects affecting our national security.” Hamidi said Malaysia continues “to call upon [Phua] to assist us from time to time and as such we are eager for him to return to Malaysia.”

In court filings in December, Phua’s attorneys argued that the 14K triad allegation “rests entirely on one sentence from a six-year-old document stating information supposedly provided by someone in the Malaysian police. One isolated sentence does not support the US government’s claim that Phua supposedly is a leader of the organization.” Phua’s attorneys filed a copy of Hamidi’s letter with the federal court in Nevada that is handling Phua’s trial.

On Saturday, a Malaysian lawyer assisting Phua’s Nevada legal team clarified that Hamidi’s letter contained no opinion on Phua’s guilt or innocence on the illegal sports betting charges. However, Tan Sri Muhammad Shafee Abdullah confirmed that Phua had provided “assistance to various agencies under the Home Ministry in matters of national security and interests.”

The Malay Mail quoted Shafee saying he had no specifics as to precisely how Phua had assisted the Malaysian government and doubted if Hamidi was at liberty to disclose specifics “as it concerns national security.” But Shafee said “civilian participation” is required for “the government’s continuous efforts to stay abreast of matters of national security.”

Shafee offered the opinion that Phua’s alleged illegality in Nevada was “not a big deal,” noting that Phua “did not murder someone.” Shafee said Phua was arrested in Las Vegas, “a gambling city. There, gambling is not wrong. He was arrested for gambling without license. It’s just a revenue offence.”

Phua was one of eight individuals arrested in July in Vegas on suspicion of handling bets on the 2014 FIFA World Cup. Five of the defendants have since reached plea deals, while charges against a sixth defendant were dropped, leaving only Phua and his son Darren contesting the charges. The pair is scheduled for a court date in Nevada on Feb. 9.

Phua’s lawyers are attempting to have the evidence against their clients ruled inadmissible due to what they claim was an illegal search of the luxury villas the eight defendants had occupied at Caesars Palace. The FBI convinced Caesars to shut down the villas’ internet connections, then sent in undercover agents equipped with body cameras when the Phuas called for technical support. Phua’s legal team believes this is a violation of the Fourth Amendment’s unreasonable search and seizure protections.