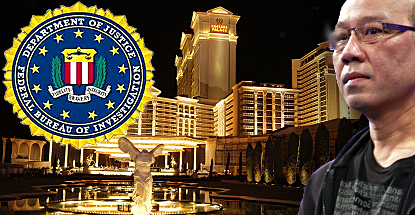 The US Federal Bureau of Investigation has broken up an Asian-facing illegal online sports betting ring operating out of Caesars Entertainment‘s Caesars Palace casino in Las Vegas. The FBI, ably assisted by the US Department of Homeland Security and Nevada gaming officials, arrested seven men and one woman on Sunday for taking illegal bets on the 2014 FIFA World Cup. According to an indictment unsealed on Monday, the eight individuals are each facing single counts of illegal transmission of wagering information and operating an illegal gambling business.

The FBI alleges that the charged individuals are connected with Hong Kong’s infamous 14K Triad. Among those arrested was Wei Seng Phua aka Paul Phua (pictured), a well-known high-stakes poker player who competed in the original Big One For One Drop tournament at the 2012 World Series of Poker and more recently placed sixth at the 2014 European Poker Tour Grand Final Monte Carlo €100k Super High Roller.

Phua was reportedly one of the two-dozen individuals arrested last month in Macau in what was billed as the Asian gambling hub’s biggest illegal sports betting bust. After posting bail on those charges, Phua apparently flew to Vegas on June 23 and picked up where he’d left off before he and his colleagues were so rudely interrupted. However, Phua more or less gave the game away after booking three high-roller suites at Caesars and requesting an “unusually large amount of electronics equipment and technical support,” including five computers (with three monitors apiece), eight digital subscriber lines and three big-screen TVs tuned to World Cup matches.

The Caesars technicians that installed and serviced the requested gear reported that the computer screens were displaying images that looked an awful lot like the screens in the casino’s sportsbook, which prompted Caesars to call in the feds. The FBI then unleashed their inner Edward Snowden on the operation, monitoring the online transactions until they had the goods, leading to search warrants being executed last Wednesday.

At least some of the online wagers were reportedly conducted via Asian online betting giant SBObet. While the wagering was processed from Caesars Palace, the arrests were made at other Vegas facilities after the individuals had already been given the boot. Caesars, which cooperated fully with the FBI’s investigation, is not suspected of any wrongdoing.

Phua’s lawyer, David Chesnoff, told the Las Vegas Review-Journal that he was trying to obtain his client’s release, as well as that of Phua’s son, Darren Wai Kit Phua, who was among the individuals expected to make their first court appearances in Nevada on Monday. If convicted of all charges, the eight defendants are each looking at up to seven years in prison and fines of up to $500k.

UPDATE: Phua was released on $2m cash bail on condition that he wear a GPS ankle bracelet and put up his $48m Gulfstream private jet as collateral. A federal judge granted Phua’s request that he and his son be allowed to stay with a local doctor/poker-buddy while they await an Aug. 4 preliminary hearing.