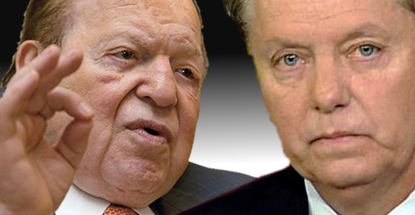 The four-page bill (read it here) differs only slightly from the House of Representatives’ version introduced in February by Rep. Jason Chaffetz (R-UT). The aforementioned carveouts are intended to reduce opposition to RAWA’s passage, particularly from state lotteries, which have angrily protested this legislative assault on state’s rights. Graham had hinted earlier this year that he would address the lotteries’ concerns in the Senate version.

However, while Graham’s RAWA would allow lotteries to conduct retail sales via self-service lottery terminals, it wouldn’t permit operations like those currently being offered by the Michigan Lottery, which sells not just online draw-tickets but also online scratch tickets, which are a pretty good facsimile of slot machines. An industry lobbyist told the Las Vegas Review-Journal that the bill “takes care of our X, Y, Z concerns but not our A, B, C concerns.”

Also, while the new carveout for on-premise casino mobile games will benefit many casino operators, it also helps Las Vegas Sands, whose boss Sheldon Adelson – a major GOP sugar daddy – is the chief engine behind RAWA. The hypocrisy of Adelson’s online antipathy while promoting Sands’ on-premise mobile games has not gone unnoticed.