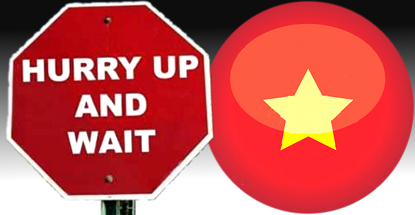 Vietnam’s government has told would-be casino developers to hold off on submitting new casino proposals until a new decree governing their operation is finalized.

Late last week, VietnamNet reported that the Ministry of Finance (MoF) had rejected a proposal by the Khanh Hoa Provincial People’s Committee to build a casino on the northern Cam Ranh peninsula. In doing so, the MoF said it had not yet finished the decree governing the development and operation of new casinos in the country, despite five years having passed since the MoF was tasked with compiling this decree.

Vietnam currently has five small-scale standalone casinos, one major property (The Grand: Ho Tram Strip) and around 50 small gaming venues located inside four- and five-star hotels. At present, all these establishments are accessible only by tourists and Vietnamese residents holding foreign passports. This prohibition has been widely cited by international casino companies as a negative factor deterring them from seriously considering expansion opportunities in Vietnam.

However, Vietnam’s government has been flirting with the idea of relaxing this restriction for local residents who can present documentation demonstrating that they are “financially capable” of dealing with potential casino gambling losses. Donaco International Ltd., which operates the Aristo International Hotel in Lao Cai, has said it would be willing to pay a higher tax rate if locals were allowed to gamble at its casinos.

While the MoF drags its heels, Vietnam continues to receive its share of casino proposals. Last month, Banyan Tree Capital (BTC) reiterated its request to add a casino to its Laguna Lang Co coastal resort complex near Danang, which opened in 2013. BTC said it would hire an outside firm to manage the casino, which it hoped would “boost Vietnam’s tourism competitiveness.”