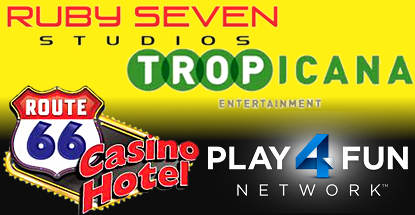 The Albuquerque-based Laguna Development Corporation’s Route 66 launched the Williams Interactive-powered Play4Fun website this week. Mobile versions of the social casino are expected to launch this summer for both Android and iOS devices courtesy of SGMS’ Mobile Concierge product.

SGMS VP of Commercial, Interactive Bob Hays said the deal demonstrated Route 66’s “confidence in the ability of the SG Universe product suite to build an engaged online player community under the casino’s brand online and through the critical mobile device channels.” Route 66 GM Tim Perkins said Play4Fun “reaches our patrons where they spend their time and will deepen their relationship with our casino.”

TROPICANA SEES RED
Nevada-based casino operator Tropicana Entertainment has inked a social casino deal with developer Ruby Seven Studios. The Tropicana Casino in Atlantic City has already teamed with UK operator Gamesys to power its real-money online casino site, which led all New Jersey-licensed operators in online casino revenue in March. But unlike that site, the Trop’s social casino offering will be accessible to players around the world via Facebook and mobile devices.