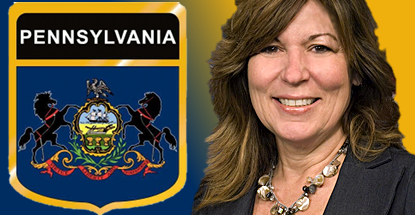 Pennsylvania got a new online gambling bill on Monday, the third such bill vying for votes in the current legislative session.

HB 920 (read it here) was filed by Rep. Tina Davis (pictured), who in 2013 authored a similar measure which ultimately failed to make it past the committee stage. Davis has a seat on the House Committee on Gaming Oversight, which is set to hold online gambling hearings on April 16 and May 6.

HB 920 is similar to Davis’ previous effort in that it would allow not just poker but also slots, table games and any other activity deemed appropriate by the Pennsylvania Gaming Control Board, with the exception of lottery games, bingo, keno, pari-mutuel betting and ‘small games of chance.’

HB 920 would reserve online gambling licenses for companies already licensed to operate slot machines and table games in the state. Licensees would have to pay a one-time authorization fee of $5m, with annual renewal fees of $500k.

Gross gaming revenue would be taxed at a rate of 28%. The overwhelming majority (85%) of the tax revenue raised from online gambling would go to programs for Pennsylvania’s senior citizens, with the remaining 15% going into the Pennsylvania Race Horse Development Fund.

A licensee would have to guarantee that the launch of online operations would not be accompanied by a permanent reduction in the number of slots and table games at its brick-and-mortar operations.

HB 920 is an intrastate bill but allows for the possibility of interstate (and international) compacts, provided this doesn’t fall afoul of US federal law.

There is no specific ‘bad actor’ provision beyond an insistence that a technology supplier’s prior activities don’t pose a threat to the public interest or the effective regulation and control of the state’s regulated online gaming activities.

CALIFORNIA DREAMING
Meanwhile, doubt has been cast on recent reports of growing consensus in California’s fight for regulated online poker. Over the weekend, reports emerged that the influential Pechanga tribe had softened its ‘bad actor’ opposition to help build a unified tribal front to beat back the state’s racing industry, which also wants to partake in any new online poker market.

On Tuesday, poker blogger Haley Hintze suggested there was more spin than substance to these reports. Hintze quoted an anonymous source saying the reports of increased harmony were more to do with “Pechanga trying to control the narrative” than with actual consensus building among the state’s bickering stakeholders.

Hintze’s source said the discussion at last week’s National Indian Gaming Association meeting in San Diego was “again, about alienating some, making it not all-inclusive, and keeping the tracks out.” Problem is, the tracks enjoy strong legislative support, including that of Gov. Jerry Brown, who has said he won’t sign any poker bill that leaves the tracks out in the cold.

Like Pennsylvania, California has multiple online poker bills vying for legislators’ attention. Whatever bill emerges as the frontrunner, it will require the support of 2/3 of the votes in each of the state’s legislative bodies. Hopes were high at the beginning of the current legislative session that this was online poker’s year, but those hopes are drying up faster than the state’s fresh water supply.