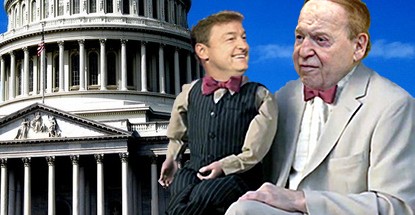 A US House of Representatives committee hearing on the Restoration of America’s Wire Act (RAWA) has reportedly been rescheduled for the end of this month.

On Thursday, the Poker Players Alliance tweeted that “multiple Capitol Hill sources” had informed it that the House Judiciary Subcommittee on Crime, Terrorism, Homeland Security would hold the rescheduled hearing on March 26.

The committee was supposed to hear testimony on the legislation – which would ban intrastate online gambling while preserving carveouts for fantasy sports and online horse wagering – on March 5 but was the hearing was postponed due to a “significant snow event” bearing down on Washington.

CHAFFETZ V. LOTTERIES (AND REALITY)
Earlier this month, RAWA sponsor Rep. Jason Chaffetz (R-UT) had a conference call with representatives of state lotteries. Should RAWA become law, lotteries would be prevented from offering services online, not to mention lose the right to offer self-service lottery ticket vending machines and video lottery terminals. State lotteries are seeking a carveout similar to the horse racing exemption but their appeals appear to be falling on deaf ears.

During his call with the lotteries, Chaffetz reportedly suggested that if the lotteries didn’t like RAWA, they could introduce their own bill. Chaffetz’s flippant remark puzzled his audience, given that state officials – unlike deep-pocketed casino bosses – have no way of introducing legislation for Congressional consideration.

Among those taken aback by Chaffetz’s comments was gambling attorney Mark Hichar, who characterized the statement as “surprisingly aggressive.” Chaffetz likes telling people that he’s never accepted money from Adelson but it appears somebody gifted the representative a fresh set of balls.

RAWA supporters’ disinterest in playing nice with the lotteries could well prove fatal for the bill. Both the North American Association of State & Provincial Lotteries and the National Conference of State Legislatures have previously warned Congress that RAWA was an unacceptable trampling of states’ rights. The National Governors Association is reportedly preparing to issue its own anti-RAWA statement any day now.

ONLINE GAMBLING STANCE HAS HELLER “LEANING NO” ON APPROVING LYNCH
Last month, RAWA supporter Sen. Dean Heller (R-NV) had a private meeting with Attorney General nominee Loretta Lynch, at which the main topic was online gambling. Following that meeting, Heller told Politico that he took “exception to some of the actions that the president has made and the fact that she’s supporting it.”

Heller was likely referring to the 2011 Department of Justice opinion on the scope of the Wire Act, which helped pave the way for states like New Jersey and Nevada to launch intrastate online gambling. However, Heller qualified that the gambling issue “isn’t the most important” factor in whether or not he’ll vote to approve Lynch’s nomination.

Fast forward to this week, and Politico quoted Heller saying he was “leaning no” on next week’s confirmation vote. Heller now claims he was “not very comfortable” with Lynch’s answers to his online gambling questions. Heller went on to claim that Lynch had “very little knowledge of what occurred in the Wire Act … you can’t be prosecuting illegal gambling and say you have very little knowledge of the Wire Act itself.”

It’s worth noting that right up until last year, Heller was pushing a plan that would authorize online poker at the federal level. At the time, Heller justified the exemption due to poker allegedly requiring “a little more skill” than casino games. But Adelson has said that the skill argument is “a bunch of baloney” and that poker is “one of the most addictive games.” Seems Heller finally got the memo. And, presumably, the check.