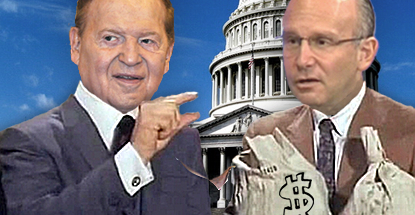 It appears that Sheldon Adelson (pictured on the left) has failed to convince Washington politicians to include his anti-online gambling legislation in the ‘cromnibus’ bill to be voted on this week.

The Las Vegas Sands titan is firmly behind passage of the Restoration of America’s Wire Act, (RAWA) which includes a federal prohibition on online gambling, even in the intrastate markets of New Jersey and Nevada. Congress is rushing to pass a smorgasbord of legislation before the holidays and fierce horse-trading is going on behind the scenes as politicians attempt to sneak pet projects into the mix.

On Monday, the Las Vegas Review-Journal’s Steve Tetrault and Howard Stutz reported being told by seven different sources that House Speaker John Boehner had balked at including RAWA in the cromnibus. Two of these sources claimed Boehner had personally called Adelson to break the bad news. Late Tuesday, the 1,600-page cromnibus was released with RAWA nowhere to be found.

Poker Players Alliance executive director John Pappas offered congratulations to his Twitter followers for making “their voice heard.” Perhaps, but pol-watchers will continue to keep a twitchy eye on Congress, as there’s still a couple days before the legislators go home and those rascals can get up to all kinds of mischief when they think no one’s looking.

On Tuesday, Tetrault quoted Senate Majority Leader Harry Reid saying that if RAWA wasn’t in the cromnibus, “it won’t be in anything.” Rumors had spread that Reid had cut a deal with Adelson to push for RAWA’s inclusion in exchange for Adelson not turning his formidable Republican campaign finance machine against Reid during the 2016 election.

Adelson’s willingness to spend nine-figures in the last presidential election meant GOP lawmakers had to at least appear to be considering granting the irascible tycoon his ‘big ask.’ But RAWA was loaded with baggage, including its willingness to trample individual states’ rights, which earned rebukes from prominent conservative organizations and individuals.

Adelson is apparently rethinking the way he funnels money to his anointed candidates. On Monday, the New York Times quoted Sands VP Andy Abboud (pictured right, holding the money) saying Adelson was considering setting up his own super PAC rather than just write checks to GOP consultants. Using the royal ‘we,’ Abboud said “we may fundamentally change how we engage in the process while staying true to our principles.”

Abboud didn’t solicit suggestions, but we’d like to see a gang of young toughs show up at Democratic rallies and toss bricks of $100 bills at the candidate. They’d make just as much of an impact as tomatoes and the paper cuts would be seriously distracting.