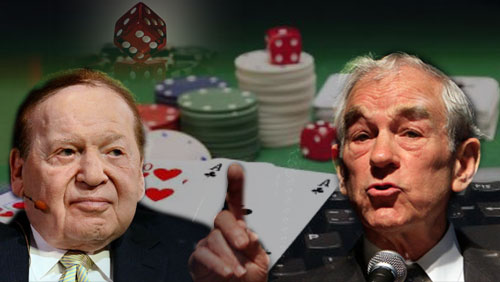 Opposition to online gambling is often seen as a strictly partisan issue, with the conservative Republican Party drawing a puritanical line in the sand. In a succinct, 600-word editorial published on the Ron Paul Institute’s website this weekend, the former 24-year Congressman and three-time presidential candidate showed that even a socially conservative Republican can fully comprehend what a bad idea Sheldon Adelson’s crusade against online gambling is.

Paul lit into his former peers’ consideration of an internet gambling ban, characterizing it as “an open secret, at least inside the Beltway, that this legislation is being considered as a favor to billionaire casino owner, Sheldon Adelson,” who is “best known for using his enormous wealth to advance a pro-war foreign policy.” Every Congressman who has jumped on board with Adelson so far says they’re working to pass the ban for some Very Important Reason or another. Paul says that what they’re doing is trying “to curry favor with a wealthy donor, allowing Adelson to use “his political influence to turn his online competitors into criminals.”

One by one, Paul ticks off the supposed reasons for the ban – combating crime, preventing terrorism, and protecting states’ rights – and shows how each one rings hollow. As one would expect, Paul also attacks the constitutionality of prohibitionists’ attempt to enact a ban to protect the rights of states who wish to prohibit their citizens from gambling. “Arguing that ‘states rights’ justifies creating new federal crimes,” he writes, “turns the Tenth Amendment, which was intended to limit federal power, on its head.” Perhaps most significantly, Paul notes that “the proposed legislation is not at all about the morality of gambling. It is about whether Americans who do gamble should have the choice to do so online, or be forced to visit brick-and-mortar casinos.”

It’s great to see such a thorough understanding of the issue from a right-wing favorite like Ron Paul. Despite being socially conservative himself, Paul doesn’t let those views get in the way of understanding the underlying economics that make prohibition of all types futile. Banning something in order to fight crime is the most basic kind of policy failure, one that enables the very thing it was supposed to prevent by ensuring that the only people filling demand are criminals.

On the other hand, it’s too bad that it’s the elder Paul speaking up on the topic instead of his son. Rand Paul, who’s currently serving as a senator from Kentucky, is getting attention ahead of the coming presidential election cycle. He’s poised to take on the national spotlight even more than his father did during his presidential runs in 2008 and 2012. A strong message of opposition to prohibition from Rand Paul could do good things for the movement to stop Adelson’s purchase of an Internet gambling ban.

Instead, much like President Obama’s post-election-drubbing announcement of his support for net neutrality, the former Congressman’s declaration of opposition to Adelson’s manipulations is a nice nod from a prominent figure who’s essentially powerless to directly influence the situation. Maybe, if we’re lucky, father and son sit down after their Thanksgiving dinner next week and have a talk about a certain billionaire’s penchant for using his influence to advance ill-advised and unconstitutional legislation.

In the meantime, there are certainly no other three-time presidential candidates talking up the tricks Adelson is pulling. In fact, it’s quite possible that a few may be preparing to accept more of the billionaire’s campaign contributions in exchange for toeing his line on internet gambling prohibition. Adelson floated has-been wing-nut Newt Gingrich’s entire 2012 presidential campaign.

The scavengers desperate for Iowa-and-New-Hampshire camera time in 2016 will certainly court the octogenarian. And there’s no doubt that at least one of them will be willing to play the role of Shelley’s Puppet. Maybe it’ll be Gingrich playing the puppet again this time around, happy to heel once again to keep himself in the lifestyle to which he’s grown accustomed. Or maybe Rick Santorum, who could teach drug-resistant bacterial infections a thing or two about persistence in the face of stark rejection, will be chosen instead.

Whoever picks up the part, there’s one sure thing: they’ll never win. The puppet isn’t about winning the presidency, which can only enact a ban if Congress passes one first. As recent experience shows, Congressmen are much cheaper and have much more actual influence over the levers one needs to pull to make prohibition a reality. For Adelson, owning a presidential candidate is about propagandizing and signalling to any politician who wants a little cash in the war chest that Casa Adelson is open for meetings.

After a fifteenth consecutive fifth-place result rolls in, Adelson’s 2016 model puppet will finally drop out of the race and pick up a sweet gig as a Fox News correspondent, or perhaps find a nice windfall on the wing-nut speaking circuit. It might be soulless and predatory way to make a living, but heaven knows it beats doing honest work for the next four years until primary season rolls around again.