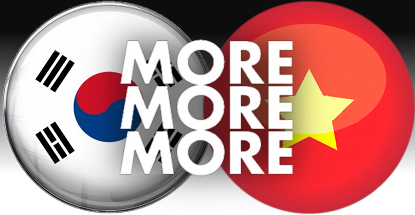 South Korea plans to issue two more large-scale casino licenses in 2015 as part of a broader plan to boost the nation’s tourism industry. On Sunday, the Korea Herald reported that the ministries of Finance, Land and Tourism had come up with a plan they hope will attract KRW 8.5t (US $7.9b) in new investment.

Deputy minister of tourism Park Min-gwon said restrictions on building new integrated resorts with casinos “will be lifted so they can be built even inside free economic zones by both local and foreign investors.”

The government believes each of these new casinos will require at least KRW 1t ($925m) of new investment with development commencing as early as 2016. The government is also willing to provide KRW 1t of loans at low interest to enable the construction of 5k new hotel rooms by 2017. Last week, the government approved foreigner-only casinos on domestic cruise ships over 20k tons.

South Korea already has three large IR projects in the works. Two of these – the Paradise City joint venture of Paradise Group and Sega Sammy Holdings and the Caesars Entertainment/Lippo Group JV – have been earmarked for Yeongjongdo Island near the Incheon free economic zone. The Genting Singapore/Landing International Development JV plans to take root on Jeju island. Of these three, only Paradise City has so far put shovels in the ground.

Chow Tai Fook Enterprises has proposed its own $1b project in Incheon and Las Vegas Sands continues to make noise about building an “iconic” resort deep in the heart of the country’s capital Seoul. However, Sands has insisted that it won’t spend a penny until the country lifts its ban on locals entering casinos and on Sunday the government repeated its insistence that the new casinos will be accessible by foreign tourists only.

Further south, Vietnam’s government has taken another step toward authorizing a casino project on the island of Phu Quoc. In September, Prime Minister Nguyen Tan Dung recognized the island as a second-tier urban area and the PM has now told the Ministry of Planning and the provincial People’s Committee to develop and submit the necessary casino regulations for his approval. Phu Quoc is located off the country’s southern coast, close to both Cambodia and Thailand.