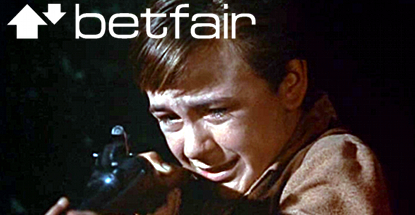 UK betting exchange Betfair has pulled the plug on its New Jersey online poker site after a seriously underwhelming performance. The site had lain inert for months like Snoopy on top of his doghouse but the time had come for Betfair to Old Yeller this puppy.

Betfair’s New Jersey poker site raised eyebrows after a prolonged streak in which monthly revenue never rose above the low single digits. Meanwhile, the poker sites of Caesars Interactive Entertainment and the Borgata/Bwin.party combo routinely reported monthly poker revenue near or above $1m apiece. In October, Betfair’s monthly rake dipped to zero. For the year to date, the site earned a total $50 in rake and Betfair apparently realized this dead dog wasn’t going to get any deader.

As first reported by US Poker‘s John Mehaffey (@John_Mehaffey), Betfair pulled the plug on its poker site on Dec. 1. The site utilized the Ongame network software and expected to be joined there by the Golden Nugget’s poker site, but the Nugget has so far launched only a casino site. Monday’s closure makes two New Jersey online poker operators to have thrown in the towel, following Ultimate Gaming’s withdrawal from the market in September.

The shutdown has no effect on Betfair’s New Jersey online casino site, which generated revenue of $856k in October, the vertical’s only gainer for the month. Betfair recently shifted its Atlantic City brick-and-mortar casino partnership to the Golden Nugget after a failed marriage with the Trump Plaza and a brief fling with Caesars.

No doubt Betfair CEO Breon Corcoran will deliver the coroner’s report on the failed poker site when the company delivers its H1 FY15 numbers on Thursday. Previews suggest the company will declare H1 revenue up 26% and profits up 37% to £67m in the six months ending Oct. 31.

Corcoran can also take pride in delivering the first results since Betfair’s share price climbed back above its Oct. 2010 initial public offering value of £13. After soaring to £15.65 on its first day of trading, the shares then began a steep and steady decline, hitting £5.71 in August 2011. It’s been a long slog back filled with restructuring and downsizing, but the stock crossed the £13m mark in mid-November and closed at £13.67 on Tuesday.