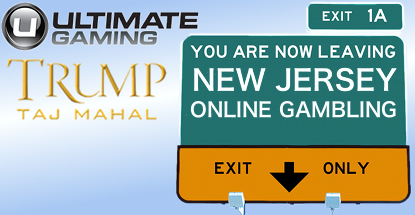 Online gambling operator Ultimate Gaming has announced it will exit New Jersey’s regulated market after severing ties with the Trump Taj Mahal, the Atlantic City casino with which the online gambling site had partnered. The financially struggling Taj Mahal has announced it could close by Nov. 13 unless it wins significant concessions from its workers.

On Friday, a statement on Ultimate’s New Jersey site told users that the company had “terminated its agreement” with the Taj Mahal and would “cease play in the near future.” No specific timeline has been offered, but the site is no longer accepting deposits and scuttlebutt has the shutdown expected within days. Ultimate Gaming insists that its players’ account balances are safe but is advising players to withdraw their funds more or less immediately.

UPDATE: Ultimate now says it will cease gaming activity at 11:59pm EDT on Sunday (21). Players will be able to access their accounts as usual until Sept. 28, after which time any remaining balances will be automatically refunded.

In New Jersey’s most recent online gambling revenue report, the Ultimate/Taj Mahal tandem brought up the rear with $603k in revenue, all but $23k of which came via its casino vertical. Ultimate’s New Jersey poker operation ranked third in August’s revenue figures, but there are only four poker platforms in New Jersey and the Betfair/Trump Plaza combo earned precisely zero dollars in poker rake last month, so third place was something of a gimme.

In announcing its New Jersey exit, Ultimate accused the Trump Entertainment Resorts casino of “multiple breaches” of the contract the two parties entered into last summer. Ultimate Gaming senior VP Marc Falcone told the Associated Press that the Taj Mahal’s owners haven’t paid Ultimate in over two months, with the total outstanding debt reaching $1.5m. “Money that the site generated and that we are owed, we were never given. It make it extremely difficult to operate under those circumstances.”

Earlier this month, Betfair had complained to the New Jersey Division of Gaming Enforcement (DGE) that the operators of the Plaza, which closed on Sept. 16, had also not responded to Betfair’s demand for the release of “certain funds” the online betting company claimed to be owed. Betfair also said the casino had ‘failed to even respond” to Betfair’s request for dialogue about its future. The DGE has said it will permit Betfair to continue to operate online while it searches for a new brick-and-mortar partner.

Ultimate Gaming chairman Tom Breitling said the company would be working closely with the DGE “to ensure a smooth transition for our online gaming customers.” Ultimate insists that its Garden State shutdown will not affect its online poker operations in Nevada, where Ultimate Poker became the first US-regulated online gambling site when it launched in April 2013. Ultimate Gaming is the online gambling offshoot of Nevada-based brick-and-mortar casino operator Station Casinos.