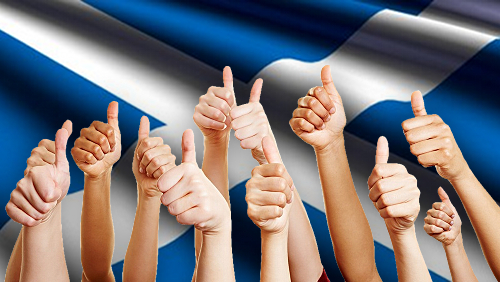 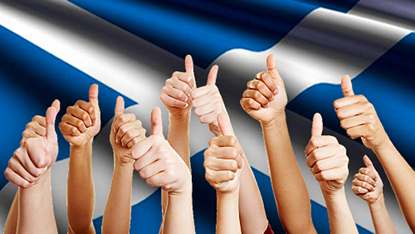 UK-based online betting exchange Betfair has announced it will pay out early on all punters who bet that Scots will vote ‘no’ in Thursday’s independence referendum. Despite many polls placing the vote firmly in ‘too close to call’ territory, Betfair “decided that ‘no’ is most likely to be the winning vote … so we’ve put our money where our mouth is.” The early payday amounts to over £100k in ‘no’ wagers placed with Betfair’s fixed-odds sportsbook but doesn’t apply to exchange wagers.

There’s no doubt that the Scottish independence referendum has been a boon for UK bookies, with William Hill spokesman Graham Sharpe saying he hoped the event represented “the coming of age for political betting.” Hills said it expects referendum wagers to top £10m, about what it handles on a high-profile English Premier League football match. One particularly gung-ho (gung-no?) bettor reportedly has £800k riding on a ‘no’ vote, while certain UK politicians – including Prime Minister David Cameron – may well have wagered their careers on the outcome.

Having personally approved the referendum question, Cameron will bear most of the blame if Scots vote for a Disunited Kingdom. A week ago, Cameron made a public plea for Scots not to vote for independence purely to stick it to the “effing Tories.” But Cameron knows that the austerity policies instituted by his Conservatives have done much to sow the seeds of Scottish discontent by creating the illusion that the much-loathed Margaret Thatcher was still calling the shots from the grave. And Cameron’s tone-deaf public posturing often invokes images of Downton Abbey, in which Scots are firmly ensconced below stairs, waiting for their toffee-nosed lord to ring for his spotted dick.

EARLY PAYOUT OR LAST MINUTE LOBBYING?
While Betfair has undoubtedly chosen its early payout with the notion that it was buying far more publicity than it could have received by spending that £100k on a new octopus, their payout can also be viewed as a thinly veiled attempt to influence undecided voters down the stretch. It’s worth noting that Betfair founder Ed Wray, who gave up an active role years ago but still retains a significant stake in the company, paid at least £50k for private lunches with Cameron in recent years.

Unlike Betfair, Bodog brand founder Calvin Ayre has enough confidence that Scots will vote ‘aye’ for independence that he’s so far refrained from urging his hordes of Honest Men to gather torches and pitchforks and lead a march on Westminster. Ayre, who traces his familial roots back to Ayrshire in Scotland’s southwest, has made a point of seeing the Bodog logo adorn the kit of Ayr United FC for several years running, even making a pilgrimage to Somerset Park in 2011 to soak up the local color (and several flasks of Scotland’s finest).

Whether Scots would fare better economically on their own than if they were to remain tethered to England is a matter of some debate. Questions rage about whether Scotland would be able to retain use of the pound or remain in the European Union and skeptics point to geologists’ forecasts that Scotland’s offshore oil reserves have already peaked. For an alternative view of a far bonnier independent Scottish economy, check out this essay by Democracy Institute director Dr. Patrick Basham, friend of the site and co-author of Gambling: A Healthy Bet.