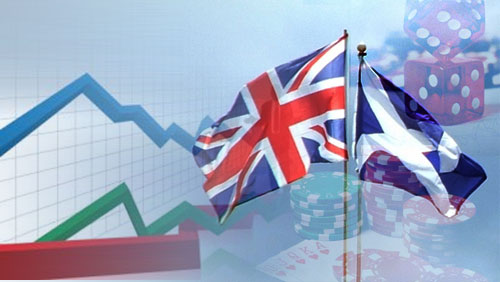 The sun is setting on the British Empire. Well, it’s been doing that for the past 100 years ever since World War I but now the island off the coast of France itself may be splitting up with a Scottish secession vote happening on the 18th and the Yes vote taking the lead for the first time. Soon, the only remnant of a British Empire will be the fact that I am writing this, and you are reading this, in English. And meanwhile, none of the UK gaming companies seem to be doing well at all.

It’s not that the gambling and betting markets in the UK aren’t growing. They are, just very slowly. Last year, the total UK market grew from £2.28B to £2.5B, about 10%. Unfortunately, that was not even close to outpacing the increase in the cost of doing business in the UK.

Three examples: William Hill’s (WMH) earning’s for the 1H 2014 have fallen 26% (page 13) compared to 1H 2013. This, despite 26% revenue growth. The difference? Cost of sales, operating expenses and a crazy 134% increase in income taxes. (An anomaly but still worth mentioning.)

It’s the same pattern everywhere in the UK. Paddy Power’s (PAP) earnings have been stagnant since 2011 despite a 49% increase in revenue. This is due to a 55% increase in operating expenses over the same period. Economies of scale are supposed to lower operating costs in proportion to revenue as revenue expands but clearly that is not happening.

Another victim is Ladbrokes (LAD), but even more exaggerated than the other two. Revenue is up 14% since 2010, not great but not horrible. And yet, earnings are down 81% over the same period. The culprits are a 46% increase in the cost of revenue and a 27% increase in operating expenses. Much of those increases have happened over just the last year.

We can see from here where the 10% growth in the UK market is going. Or rather, it’s not going anywhere, because that growth is costing Britain’s best companies to lose money hand over fist. What can be said of these three despite the dire numbers is at least they are still profitable. The same cannot be said of basket case bwin.party (BPTY).

Bwin.party reported an operating loss of over €100M last week with a 7% loss in revenue. The silver lining is the fact that 95% of the company’s operating loss was an impairment charge from underperforming poker assets. This is probably the reason, or at least a big reason, why BPTY jumped 13% on the news of the big loss. If we take out the impairment which will be gone by next quarter, is it better for income to shrink by 81% while revenue increases by 14% like Ladbrokes, or does it show better management and potential if a company loses 7% in revenue but cuts its losses (excluding impairment)?

Companies growing in term of revenue but shrinking in terms of earnings, unless they are on an acquisition or growth binge, will need to restructure at some point down the line, which will be a big headache for both management and investors. You can’t keep growing your revenues while hurting your bottom line indefinitely. Companies shrinking but improving the bottom line, even if it that bottom line is negative, are already in the process of that restructuring, meaning the worst part of the headache is probably over. The big counterintuitive move last Friday in Bwin.party’s stock seems to suggest that’s what traders are thinking.

What all these companies show is that it is getting harder and harder to do business in Great Britain, and it will keep getting harder still, what with the new 15% point of consumption tax. The last thing any of these companies need is another 15% hit to their bottom lines. That’s why the possible Scottish secession from the UK next on the 18th is so interesting.

The reason people secede from any state is that the economic burden of being part of it outweighs the economic benefit. As 7th Vice President of the US John C. Calhoun pointed out in the 19th century, taxes create two classes, and two classes only. The net tax payers, and the net tax receivers. The net tax receivers usually want to remain part of the state so they can keep receiving. The net tax payers usually want to secede, so they can stop paying. Scotland’s vote will be a rough reflection of how many of each class there are in Scotland.

There isn’t exactly a Prima Nocta going on where every Scottish bride-to-be has to spend a wild night partying and getting high with Prince Harry (in other words a tax on marriage), but William Wallace would nonetheless be embarrassed if his brothers elected to stay servants of the Queen. If the Scots decide to watch Braveheart one too many times in the next 9 days, get pumped and actually vote to secede from the Crown, then this would open up a whole new tabula rasa for companies to set themselves up in a new Scotland where national taxation would have yet to take root.

If Scotland does secede, England takes its debt. Clean slate. If it then keeps its taxes much lower than England’s, it will give these companies, any company really, an opening to do business at much lower costs. The reason the costs of doing business rise across the board is almost always government policy. Taxation and inflation. They will keep going up.

What about a currency, what about setting up a new economy, what about this, what about that are the questions all the pundits are asking in the event that Scotland succeeds and secedes. The only rule that Scotland must follow if it wants to boom is laissez faire. Let the Scots set up their own private currencies however they want. Give William Hill, Paddy Power, Ladbrokes and bwin.party a place to do business without interference. They can handle it, if the new Scottish government can handle not butting in.

Otherwise, expect business costs to keep rising along with taxes in the UK. In that case, the future of UK gambling looks bumpy near term.