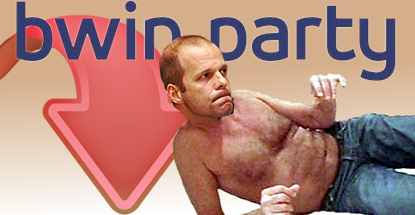 UK-listed online gambling operator Bwin.party digital entertainment is the living embodiment of Newton’s law of motion, in that its downward trajectory appears unstoppable. The company delivered its H1 report on Friday, showing revenue down 7.5%, earnings down 23% and an operating loss of €100.4m (of which €95m came via a non-cash impairment charge against its underperforming poker assets.)

Apparently unable to afford proper superlatives, Bwin.party said the 2014 FIFA World Cup had a ‘positive” effect on the company’s sportsbook. The vertical generated revenue of €127.4m, although this was up a mere 7% year-on-year, so perhaps damnable faint praise was all that was warranted. Amazingly, sports betting handle actually declined 5% year-on-year, despite World Cup winners Germany being Bwin.party’s core market.

Things were even more ghastly on the earnings front: bingo rose 89% to €5.3m, but every other vertical was down: casino fell 4% to €23.6m, sportsbook slipped 16% to €21.7m while poker recorded a €1.4m earnings loss, a 119% turnaround from the same period last year, partially due to startup costs in New Jersey’s regulated market.

The New Jersey business reported a net loss of €7.3m in H1 and the company expects to lose €6m more by year’s end. A Nevada launch is planned for H2, but given the market’s size and its poker-only status, the effect on US revenue will be minimal. In the absence of any new states launching their own online market, CFO Martin Weigold said the company doesn’t expect the New Jersey business to break even until at least 2016.

Bwin.party’s key performance indicators were almost uniformly down, with 11% drops in both active player days and daily average players while new player sign-ups and average daily net revenue fell by single digits. But yield per active player day rose 4%, so the company is getting better at squeezing blood and/or money out of a stone. Things haven’t got much better in Q3, with net revenue down 4% year-on-year, despite the second half of the World Cup.

MY NAME IS NORBERT AND I’M A CEO…
Despite this dire update, Bwin.party’s stock, which had been threatening all month to slip below the psychological 80p threshold, had its biggest gain in years on Friday, rising nearly 13% to 90.3p. While we’re not above suggesting someone dumped a barrel (or two) of MDMA into London’s water supply, the irrational exuberance seems to be based on Bwin.party management having had something akin to an alcoholic’s ‘moment of clarity,’ i.e. publicly admitting that they have a problem and things cannot continue in their present state.

Bwin.party CEO Norbert Teufelberger (pictured) said it was becoming “clear that a more fundamental approach is needed to turn around our commercial and operational performance … This new approach will also allow us to consider alternative financing and corporate structures in order to create additional value.”

As a hint of what these new structures might entail, Bwin.party chairman Phillip Yea suggested the company may spin off its US-facing operations into a separate company, in which an outside party may take an ownership stake. The company is also discussing a “strategic partnership” with an unnamed firm as regards Bwin.party’s online payments operation Kalixa. Bwin.party also plans a fire-sale of non-core assets that could realize as much as €40m. First to go is the company’s 40% stake in Vienna-based Betbull.

Bwin.party suggested that it doesn’t expect to be one of the lucky 20 recipients of a German sports betting license (assuming the country actually gets around to issuing the things). Since Bwin.party estimates it holds a 35% share of the country’s sports betting market, this would represent a body blow to the company’s future. On a post-earnings analyst call, Teufelberger suggested the losing bidders could launch a legal challenge of the licensing proceedings, which would ensure the status quo would continue for the next couple years.

The recent acquisition of PokerStars by Canada’s Amaya Gaming – and Amaya’s plan to expand Stars’ reach into casino, sports betting and social gaming verticals – loomed large in the company’s list of potential obstacles to righting Bwin.party’s sinking ship. Yea referred to the acquisition as a “game changer” while Teufelberger said the transaction had “created a gorilla.”

Teufelberger described the intent behind the 2011 merger of Bwin and PartyGaming as creating “a supertanker” but the online gambling market “did not necessarily evolve the way we expected.” In addition, Teufelberger said the company wasted a lot of time and effort “integrating the companies, trying to merge cultures, which was very, very difficult to achieve.” Yes, if only someone could have predicted those problems before the merger went through…