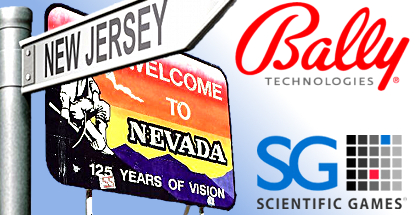 The DGE had approved such interstate links in February and April saw Bally rival International Game Technology (IGT) link its slots in Caesars Entertainment and Boyd Gaming casinos in Atlantic City with machines in South Dakota. The DGE says it remains open to discussions with regulators in other gaming jurisdictions (note the use of the word ‘jurisdictions’ instead of ‘states’ – always thinking big, these DGE folks) that might have an interest in joining the wide-area progressive party. However, the DGE has yet to sign on to the interstate online gambling agreement Nevada and Delaware inked in February.

Bally’s New Jersey-Nevada linkup went live on Wednesday but was only announced Thursday after everyone determined their technological wizardry hadn’t spawned a new Y2K or something. Bally says its Cash Connection multi-state wide area progressive slot system will hopefully allow combined progressive jackpots to grow to “huge” proportions, much in the way multi-state lotteries like PowerBall and MegaMillions have generated jackpots in excess of half-a-billion dollars. Bally’s Cash Connection linkup is starting from a more modest base of $2.2m but from such tiny acorns mighty oaks do grow.

Meanwhile, Bally’s takeover by Scientific Games Corp. has been cleared by federal anti-trust regulators. On Wednesday, the Federal Trade Commission announced it had no issue with the $5.1b acquisition and thus granted early termination of the mandated waiting period for such deals. The acquisition still awaits approval by gaming regulators and Bally shareholders but the deal is expected to close by early 2015.