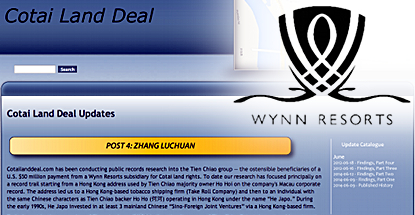 The owners of the Massachusetts property on which Wynn Resorts hopes to build a casino have signed statements to the effect that no criminals will profit from the sale of the land to Wynn. Assuming it’s granted a license, Wynn wants to build a $1.6b casino on the site of a former chemical plant in Everett, just outside Boston. But the plan has been dogged by rumors that the property’s former owner, convicted felon Charles Lightbody, remains a secret investor, which would be a violation of Massachusetts’ 2011 casino law.

Paul Lohnes and Dustin DeNunzio, two of the Everett property’s three owners, signed statements in December denying any secret ownership. Anthony Gattineri, who officially holds a 46.7% stake in the property, had refused to add his name to the list. Gattineri apparently had a change of heart, undoubtedly influenced by Wynn’s apparent willingness to walk away from the project unless the ownership issues were clarified to the satisfaction of the Massachusetts Gaming Commission (MGC).

The Boston Globe reported last week that Gattineri had agreed to sign the oath if the MGC approved a plan for him to pay off a $1m debt to Lightbody. On Thursday, Wynn announced that all three owners had now put pen to paper disavowing any clandestine ownership, which Wynn felt “resolves the issues related to our land acquisition.” The MGC has stated that the land ownership issue would factor into its decision whether to award the lone Boston-area casino license to Wynn or to Mohegan Sun’s rival bid in Revere.

WYNN DARES MACAU MUCKRAKER TO TAKE IT PUBLIC
Meanwhile, Wynn is daring the operator of a new muckraking website to directly accuse it of wrongdoing. Jeffrey Feidler, director of the US-based International Union of Operating Engineers (IUOE) and the man behind the now defunct CasinoLeaks-Macau website, recently launched a new site, CotaiLandDeal.com. The focus of the new site is a real estate transaction in which a Wynn subsidiary acquired the Macau property on which the new Wynn Palace casino is being developed.

Fiedler told the Macau Daily Times “we still know next to nothing” about Tien Chiao Entertainment Ltd., which received $50m in 2009 from Wynn in exchange for the property. The post on Fiedler’s site has largely rehashed info first disclosed two years ago in the Wall Street Journal but Fiedler is promising future posts will add detail on the companies and individuals involved in the deal. Fiedler ominously speculated that “there is no telling where it leads.”

Wynn is hoping it leads to a courthouse, telling the MDT the new site was just “the latest effort in Mr. Fiedler’s attempts to bully Wynn Resorts and our employees into supporting” the IUOE. Wynn noted that Fiedler “refuses to accuse us directly of any misconduct” but should Fiedler dare do so, Wynn “would respond to it in court.” Other than that, Wynn says Fiedler’s attacks “do not merit any serious response.”