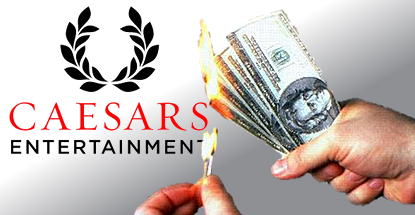 Struggling casino operator Caesars Entertainment continued its losing ways in Q1, reporting a $386.4m loss, 77% worse than the same period last year. Even worse, revenue fell 1.9% year-on-year to $2.1b while gaming revenue fell 8.6% to $1.36b. Caesars CEO Gary Loveman blamed the downturn on “extreme weather and softness in visitation” at its properties outside Las Vegas, the Q2 2013 sale of part of its Uruguay casino and, oh yeah, the $592.3m interest owed on Caesars’ industry high $23b in debt. (More on this later.)

As other Nevada casino operators have stated, Vegas is enjoying something of a resurgence, and Caesars’ 10 Vegas properties reported revenue up 5.6% to $794m. However, the gains were mostly due to a 27% increase in hotel room rates, as gaming revenue fell by around $20m. Revenue at Caesars properties in Atlantic City and Philadelphia was down 13.7% to $315.3m. Caesars other US properties reported a 6.7% revenue decline to $699.2m.

Having shifted the online gambling and social gaming operations of Caesars Interactive Entertainment (CIE) into the new Caesars Growth Partners (CGP) offshoot, Caesars has finally begun reporting specifics on its online revenue. CIE revenue was up 82.4% to $124.2m – $115.7m from social and mobile gaming and $8.5m via the World Series of Poker and real-money online gambling – representing 54% of CGP’s total revenue. By contrast, the brick-and-mortar casino properties that Caesars ‘sold’ to CGP added $102.1m.

DEBT? WHAT DEBT?
On Monday, Moody’s analyst Peggy Holloway warned that the recent asset shifts by Caesars’ hedge fund owners – Apollo Global Management and Texas Pacific Group (TPG) Capital – were “reducing the asset base underlying the debt, which will likely lead to deeper losses for lenders and bondholders upon a default.” Caesars is already being sued by two separate groups of investors who says Caesars’ shifting of its profitable assets away from the parent company is illegal. Caesars insists the suits have no merit.

On Tuesday, Caesars announced it had engaged in yet more efforts to kick its debt can further down the road and reduce its liabilities in case of bankruptcy. These moves included offering $1.75b in new debt to redeem its existing 2015 maturities and the sale of 5% of Caesars Entertainment Operating Co. (CEOC) to undisclosed institutional investors. Quite apart from any funds raised, the prime motivator behind the sale appears to be the fact that it allows Caesars to limit debt guarantees to bank debt holders.

Tuesday’s news pushed the value of some $2b of Caesars’ 2017 debt obligations down to 88.5¢ on the dollar, while $1.5b of 2020 debt fell as low as 80¢ on the dollar, both figures representing new lows. Second-lien debt has fallen from 64¢ last May to 44¢. At this point, it’s a race to the bottom between Caesars and the funds stranded on Lock Poker, with Lock holding a comfortable lead, but only for the time being.

ATLANTIC CITY CASINOS ON THE CHOPPING BLOCK?
Before opening up Caesars’ earnings call to questions, Loveman had a ‘don’t mention the war’ moment by insisting that he wouldn’t be discussing Tuesday’s debt juggling. (Loveman did offer up a lame joke related to Caesars’ increasingly confusing structure, apologizing for “crippling everyone with acronyms here.”) Some analysts gamely tried to raise the subject, but were rebuffed and the scheduled hour-long call wrapped up in half the allotted time.

Loveman did address Atlantic City’s ongoing decline, saying the problem was “too much capacity” and thus Caesars was looking at “options to reduce capacity.” Loveman referenced the closure earlier this year of the Atlantic Club and suggested “you will see more of that” but declined to say whether Caesars would look to close any of its four AC properties or, like it did with the Atlantic Club, buy other struggling properties for the sole purpose of shutting their doors. The latter option might cost a lot of money, but hey, if you’re not planning to honor those debts anyway, what the hell?