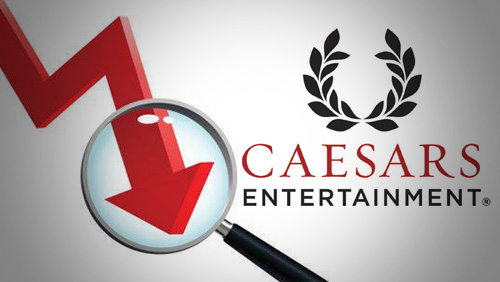 The ears were pricked, and the hounds were sniffing for blood. CZR was about to announce their Q4 financial results.

So what was the verdict?

Well when you have to report $1.756bn in losses it’s not the success story shareholders in CZR would have been looking for, but the casino giants chiefs were quick to pounce on the plus points of a year that saw net revenue fall less than 1% to $3.07m during a period of exensive change.

The losses arrived despite net revenue growing to $2.078bn from $2.01bn a year ago, which was slightly lower than the expert opinion of $2.12bn, but still good news underneath the weight of a quite startling headline number.

So where did the losses come from?

The biggest pill to swallow was the loss of $1,864.2bn in operations, primarily due to impairment charges, which totaled $1,963.3bn. If you take these impairment charges out of the equation then the loss from operations actually improved year-on-year up $4.3m due to a decrease in depreciation expense.

The company pointed the finger at deteriorating market conditions in Atlantic City, and changes in the ‘expected useful life of certain of our property assets’. Mention was also made of the write off of equity investments in Suffolk Downs in Massachusetts during Q4.

During this time CZR agreed to offload four casinso to the new affiliate Caesars Growth Partners LLC for $2.2bn: Bally’s Las Vegas, The Cromwell, The Quad Resort and Casino and Harrah’s New Orleans forming that sale.

CEO Gary Loveman said the sale of the casinos was ‘an important step in our efforts to improve the health of Caesars Entertainment.’

There was also a loss in Casino Revenue with a $75.3m decline, or 5.1% year-on-year. The reasons given were increased regional competition in the markets outside of Vegas, most noitably AC, and the hit that was taken after the partial sale of Conrad Punta del Este casino in Uruguay in the second quarter of 2013.

Table game volume was up thanks to the whales at the baccarat tables, but slot volumes were slightly down through the CZR business.

On the plus side?

“While the operating environment remained challenging in the fourth quarter, we are encouraged by volume and visitation trends in our core market of Las Vegas,” Loveman said. “We are optimistic about the prospects for Las Vegas.”

Revenue from Caesars Interactive Entertainment (CIE) saw revenues for online and social gaming increase 52% to $316.6m, but they still haven’t disclosed any financial numbers of the progress of online poker in Nevada.

CIE also launched real money online gaming in New Jersey on Nov 26 and it’s hoped that this will also be a silver lining and in otherwise pretty gloomy sky.

Loveman also made note that the $550m Linq complex will be open for business in a few weeks time.

Caesars debt load currently stands at $20.9bn, down from $23bn in the previous quarter.