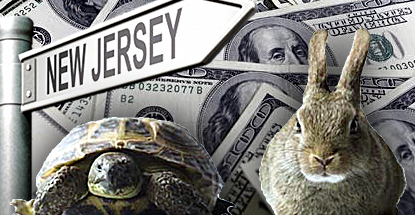 New Jersey’s regulated intrastate online gambling market earned just under $11.9m in March, 15.2% higher than the previous month’s tally, with most of the gains coming via the casino vertical. According to figures released Monday by the state’s Division of Gaming Enforcement, casino games earned the lion’s share ($8.6m) of the online revenue while poker stalled at $3.2m, up just $100k from February.

Pretty much all of that poker gain ($85k) came via the Borgata/Bwin.party combo, which continued its role as online market leader, earning $4.4m ($2.75m casino, $1.65m poker). Caesars Interactive Entertainment (CIE) was once again bridesmaid, earning $3.7m ($2.25m casino, $1.47m poker). Rounding out the top three was the Tropicana/Gamesys tandem with $1.9m, all of it from casino games.

The Trump Taj Mahal/Ultimate Gaming pairing was fourth with $682k ($582k casino, $100k poker), while the Golden Nugget’s casino-only offering came fifth with $677k and Trump Plaza/Betfair brought up the rear with $509k, with poker contributing just $25 to that total.

All told, the online poker vertical has now shrunk from roughly half the overall online revenue pie in December to around one-quarter, underscoring both the growing appeal of online casino and the lack of new poker players joining the early adopters that had been eagerly awaiting the market’s launch in late November. The number of registered players increased 18% sequentially to 292k but it’s clear the online firms’ marketing departments have their work cut out for them if they want to expand poker liquidity.

On the land-based front, Atlantic City casinos continued their epic swoon in March, although the 1.9% fall in gaming revenue is one of the smaller declines the east coast gaming hub has recorded in recent years. Excluding the Atlantic Club, which shut its doors in January, total slot machine win fell 4% to $155.1m while table game revenue gained 3.3% to $66.3m for a combined haul of $221.5m.