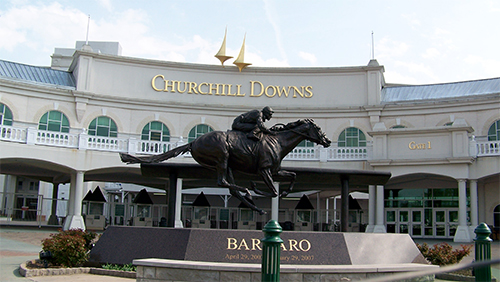 The Kentucky Derby is scheduled to begin this weekend, yet a lot of the attention has been focused on action outside the actual race.

Churchill Downs, the 140-year old track that hosts the annual Derby, is dealing with a lawsuit with Leonard Lusky, the Louisville entrepreneur behind the Secretariat.com website. The racetrack sued Lusky back in 2012 over alleged intellectual property violations after Lusky sold merchandise with phrases associated with Churchill Downs and the Kentucky Derby. A federal judge has ruled in the company’s favor, but Lusky’s punishment hasn’t been meted out. Reports indicate that the businessman could pay at least $15,000 plus attorney’s fees in damages but other penalties haven’t been ruled out.

Essentially, the case appears to have been settled, but it’s still taking attention away from what should be the biggest and most important week of the year for Churchill Downs.

The lawsuit against Lusky was launched two years ago after he began using the track’s old name, the Louisville Jockey Club, to sell merchandise. Churchill Downs objected to the sale of these items but Lusky defended his right to do so, pointing out that he received a trademark for the name in 2011. According to Lusky, Churchill Downs hasn’t used the original name of the track for more than 80 years and thus it has become part of the public domain.

Ultimately, Lusky lost the legal battle after U.S. District Judge Julie Carnes said consumers who are aware of the track’s old name could still associate it with Churchill Downs and the Kentucky Derby, rather than “some generic horse-racing activities in Louisville.” Judge Carnes has yet to decide on the damages the Louisville businessman has to give to the race track.

The potential damages look like a pittance relative to what the track achieved in the first three months of the year when overall revenue rose 13% year-on-year to $167.3 million. But the fact that the track has had to answer questions on this topic during Kentucky Derby week isn’t sitting too well with people who believe that the attention should be on the biggest horse racing event of the year.