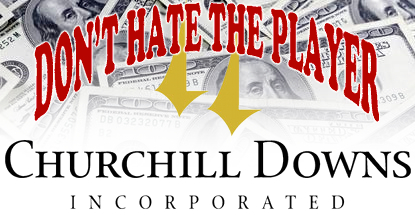 Racing and casino operator Churchill Downs Inc. (CDI) earned record revenue in Q1 but higher expenses resulted in a $700k loss for the period. Overall revenue in the first three months of 2014 was up 13% year-on-year to $167.3m, based largely on the continued strength of CDi’s brick-and-mortar casino operations. Gaming revenue increased 20% to $86.5m, nearly three times racing’s $30.6m (+10%) contribution. CDI’s ‘Other’ revenue declined 19% to $4m.

The gaming boost was spurred by the July 2013 acquisition of the Oxford Casino in Maine, which added $17.5m in revenue in Q1. That helped offset continued weakness at CDI casinos in Mississippi and Louisiana, which were down $1.7m and $1.4m respectively. But expenses were up across the board, led by a 22% increase in casino operating costs and $600k spent on lobbying Kentucky legislators on various gaming issues.

Revenue at CDI’s online division, which includes the TwinSpires race betting service, gained 7% to $46m thanks to the resumption of ADW business in Illinois, which temporarily went offline last year after politicians failed to renew the necessary legislation. Online wagering handle increased 8.8% in Q1, outpacing total industry wagering by 10.9%. But online earnings declined $1.4m thanks to the loss of CDI’s Texas-facing business, increased taxes in certain states and $1.1m in costs associating with developing CDI’s new online gambling platform (about what CDI reported spending on the platform in Q4 2013).

Questions as to when that online platform might start generating revenue featured heavily in a post-earnings call with analysts. CEO Robert Evans said CDI would continue to invest in building its online platform “at about the current rate, at least through the rest of this year.” Evans said CDI planned to be “a significant player” in the US online gambling market, which the company viewed as a “significant opportunity for us.” (CDI sent legal VP Brad Blackwell to Wednesday’s online poker hearing at the California Assembly to make a case for CDI’s inclusion in that market.) Evans said CDI was taking a “long-term view’ on US online gambling. “We can’t make states legalize internet gaming any faster … But as that occurs, we want to be a player.”