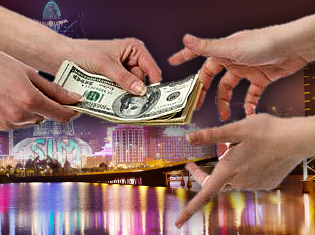 Macau casino gambling revenue hit an all-time high of MOP 36.5b (US $4.57b) in the month of October, bludgeoning the previous record of MOP 31.34b ($3.92b) set this March. Analysts had projected this year’s Golden Week holiday travelers would likely gamble their way into the record books but the final tally exceeded expectations, rising 31.7% over October 2012’s take.

To put the new monthly record in even sharper perspective, it represents nearly three-quarters of the total gaming revenue Las Vegas Strip casinos earned throughout all of 2012. Over the first 10 months of 2013, Macau gaming revenues have risen 18.4% over the same period last year, reaching an impressive MOP 297b ($37.1b), not far off 2012’s total haul of MOP 304b.

Macau’s gaming surge is increasingly driven by its mass and ‘premium mass’ segments. While the VIP market is also posting decent gains, the mass market segment cuts junket operators out of the mix, creating vastly higher margins for casino operators. Las Vegas Sands, in particular, has benefited from its devotion to the mass market. In its most recent quarterly earnings report, Sands reported its formerly “laggard” mass table win rising 61.2%, beating the broader market increase of 38%, adding a record $1.06b to Sands’ revenue in Q3.

The mass boost led Sands president of global gaming operations Robert Goldstein to tell analysts that Sands Cotai Central (SCC) is on track to become the third Sands property – joining Venetian Macao and Singapore’s Marina Bay Sands – to exceed $1b in annual earnings. Sands chairman Sheldon Adelson said SCC delivered a record $224m in earnings in Q3, and “no property in the history of Macau has reached that level of profitability so quickly.” Sands is currently renovating a new premium mass area at SCC, which will feature 75 gaming tables when the room opens in the spring.

Goldstein said the commitment Adelson made years ago to ensure Sands’ Cotai properties had thousands of hotel rooms gave Sands a “huge advantage” over rival operators. Goldstein cited recent Macau stats showing visitors from beyond China’s Guangdong province surpassing Guangdong visitors. These visitors “come from further away and require sleeping rooms … and our success in Macau, we keep growing our table games, our mass tables are over 1,000 now, but we can do that because we have the sleeping rooms to drive that revenue.”

Adelson said that with major transportation infrastructure projects being built on the Chinese mainland, Macau’s restrictive gaming table cap could actually work to the casino’s advantage by boosting each table’s profitability. “With the limit on table caps and just more people coming in, we’re going to have a lot more win per day … So we can go from say, $11k or $12k, $13k per table in mass. It will go up to $13k, $14k, $15k, $17k, $20k. It could go higher.” If October’s record haul is any indication, the only limit to Macau’s growth appears to be one’s imagination.