Home / Casino / Has Macau’s premium-mass emphasis priced out consumers from its casinos? 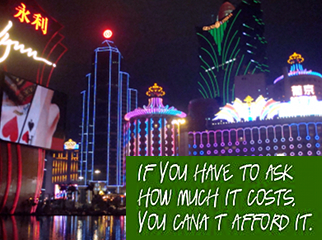 Earlier this month, Nomura Equity Research predicted Macau’s gambling revenue would top $70b by 2017. But why stop there? Ben Toh, CFO of Sands China, told attendees of the G2E Asia’s Show Me The Money CFO roundtable that Macau’s annual haul could top $100b by 2020. Toh said Macau was currently only tapping 1.5% of China’s population and continued development of mainland transportation infrastructure would help connect Macau with provinces beyond Guangdong, dramatically boosting the potential customer base.

On the same panel, SJM Holdings CFO Bob McBain dismissed suggestions that China might undercut Macau by legalizing gambling on the mainland. McBain described this scenario as unlikely “because it’s just contradictory to communist ideology.” Even if China did authorize gambling in other regions of the country, MGM China CFO Hubert Wang said Macau would still benefit, much like Las Vegas did from other US states introducing casinos into their local markets. “These regional venues attracted more gamers and the penetration rate as a whole increased. Now they know that Las Vegas is a Mecca of gaming and people are still eager to go there.”

But will they find a place to play once they get there? Toh noted that when the Venetian opened in Macau, minimum bets at mass-market tables were in the HKD 100-200 (US $13-$25) range. Today, those minimums are more like HKD 500-1000. Wang believes such changes had “priced out some consumers from the market.” Following the panel, McBain told Macau Business Daily that the overemphasis on VIPs and premium-mass players would be “bad for Macau’s reputation as a destination for everybody.” McBain would like to see the local government require operators to offer some HKD 50 tables to allow non-VIPs somewhere to play. Otherwise, these players would be “relegated to the slot machines and electronic games.”