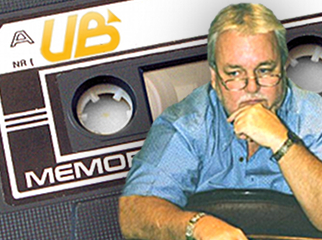 UPDATE: Late Saturday afternoon, Ultimate Poker rep Chris Danek posted the following to 2+2: “As of late Thursday night, May 9th, Ultimate Poker discontinued the use of all services from Iovation. We understand that there were concerns among some of our customers, we hope this makes our players feel more comfortable.”

The nearly decade-old cheating scandal at defunct online poker site Ultimate Bet (UB) has been unceremoniously dragged back into the spotlight following the release of two audio recordings of UB principals discussing ways of minimizing the fallout. The lengthy recordings were made in 2008 by Russ Hamilton, the central figure in the cheating scandal, and released onto the internet by Travis Makar, Hamilton’s former tech assistant. It’s unclear why Hamilton made the recordings, but it’s safe to say he now regrets making them. (Listen to the recordings in full here and here, or check out the crucial 10-minute excerpt in the video at the bottom of this page.)

On the tapes, Hamilton cops to having profited over $16m from his cheating activities, but most of the conversation between Hamilton, UB founder Greg Pierson and UB attorneys Daniel Friedberg and Sanford Millar centers around ways of minimizing fallout from the scandal and limiting potential ‘make-good’ payments to those from whom Hamilton obtained his ill-gotten gains. Hamilton cites various justifications for not returning the money, including suggestions that he used some of the money to help promote UB in the poker marketplace.

IOVATION UNDER FIRE
Pierson is the man behind the ‘God mode’ feature of UB’s software that allowed Hamilton and other select UB insiders to view other players’ hole cards. Pierson has since gone on to found Iovation, the online fraud prevention service employed by many online gambling companies. Iovation was recently revealed to be providing services to CAMS, the Nevada-licensed subsidiary of online risk management outfit Verifi that was tasked with providing geolocation and player verification for Nevada’s first real-money online poker site UltimatePoker.com (no relation to UB).

Poker blogger Haley Hintze, who has covered the UB scandal in depth, claims to have received an email from Makar in which he revealed that the publicity surrounding Iovation’s involvement in Nevada’s fledgling online poker market prompted him to release the recordings. UltimatePoker reps have insisted that Iovation has “zero access” to their software or database, but given Nevada regulators’ need to prove that they’ve got a handle on their new online realm, Iovation’s continued presence in Nevada’s online poker market – or that of other states – could be a very bad bet.

The fact that actor and well-known poker fan Ben Affleck is cited on the recordings as losing half a million dollars to Hamilton will only ratchet up mainstream media interest in this story. Nevada will come under pressure to demonstrate that their stated antipathy toward ‘bad actors’ is more than just a smokescreen to protect their local casino companies from having to compete with the likes of PokerStars.

LEGGETT’S ROLE QUESTIONED
The recordings also put a brighter spotlight on Paul Leggett, the former chief operating officer for Tokwiro Enterprises, the parent company of the Cereus Network (following the merger of UB and Absolute Poker) until its post-Black Friday implosion. The recordings suggest Leggett was more aware of the extent of the cheating – and the ongoing involvement in UB/AP’s daily activities of those linked to the cheating – than previously stated.

After a lengthy absence from the spotlight, Leggett was recently appointed head of online at Canadian online gambling operator Amaya Gaming. Amaya has yet to apply for a Nevada interactive gambling license, but it has struck deals to make its Ongame Poker Network available to Nevada-licensed companies including Bally Technologies and SHFL Entertainment, as well as the nLive US-facing free-play online gaming site operated by Australia’s Aristocrat Technologies.

The release of the recordings has reopened an old wound with UB’s former player base and the online poker community in general. While many will enjoy having their longstanding suspicions re Hamilton’s antics confirmed, it won’t undo the damage inflicted by Hamilton and the other UB principals. The recordings also provide yet another stick with which online poker’s critics will use to beat back liberalization efforts across the US. Seriously, about the only real beneficiary from these recordings is Lock Poker owner Jennifer Larson, who will be eternally grateful for the finger of scorn being pointed – even momentarily – at somebody else.