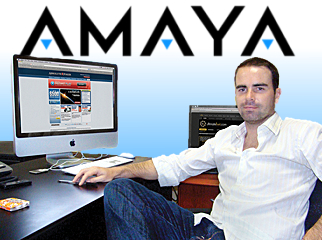 Canadian gambling outfit Amaya Gaming Group saw revenue rise a whopping 316% to CDN $76.4m in its fiscal year ending Dec. 31, 2012. Amaya’s bulging revenues are the product of a seemingly endless series of deals and acquisitions the company has pulled off over the past couple years, culminating in what CEO David Baazov described as a “transformational” 2012. Among the acquisitions Amaya made in 2012 were software outfit Cryptologic, Bwin.party’s online poker platform Ongame and US gaming device supplier Cadillac Jack.

Despite the revenue surge, Amaya posted a net loss of $7.1m for the year, thanks in part to the additional staff the company assumed as part of its acquisition binge and the inevitable buyouts of many of these employees’ contracts. Amaya’s general and administrative expenses for 2012 increased 349% to $62m while selling and marketing expenses rose 80% to $11.7m. Financial expenses increased 10-fold from $680k in 2011 to $6.82m in 2012 thanks to interest charges related to the Cryptologic and Cadillac Jack deals.

Amaya’s revenue is now concentrated in Europe, the Caribbean and North America. Baazov said European operations had “expanded dramatically” in 2012 by increasing the licensee base of its subsidiaries Cryptologic and Chartwell. The latter company, which Amaya acquired in 2011, went from a net loss in the first half of the year to a “significant contributor of income” by the end of 2012. Looking ahead, Baazov touted the expected payoffs from its new strategic partnerships in the US, including deals with Bally Technologies, SHFL Entertainment, the Mohegan Sun casino and American Casino & Entertainment Properties (ACEP).

PAUL LEGGETT APPOINTED AMAYA’S HEAD OF ONLINE
In related news, eGamingReview reported that Amaya has appointed Paul Leggett (pictured lounging above right) as its head of online, replacing Peter Bertilsson, who will stay on as a consultant. Leggett’s previous role in the online gambling industry was that of COO at Tokwiro Enterprises, the parent company of defunct online poker site Ultimate Bet (UB). The fact that Leggett will now be overseeing Amaya’s Ongame online poker operation has arched more than a few eyebrows in the online community, given the general disdain reserved for pretty much anyone even remotely associated with the scandal-plagued UB.

While Leggett was not involved in the Russ Hamilton cheating scandal that brought UB into such disrepute in 2007-08, his apparent eagerness to minimize Tokwiro’s responsibilities following its acquisition of UB left many players feeling more than a little frustrated. Prior to this week, the last time Leggett’s name made the news was shortly after the April 15, 2011 ‘Black Friday’ indictments, when a testy email exchange between Leggett and UB’s customer service chief foreshadowed the company’s imminent demise. At the very least, Leggett’s past associations could prove problematic for Amaya’s US ambitions, assuming gaming regulators continue their efforts to bar ‘bad actor’ types from any participation in a regulated US online gambling market.