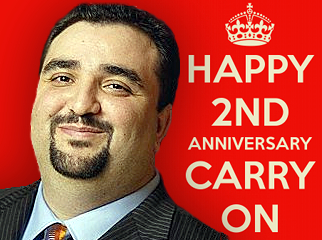 Two years to the day that the Black Friday indictments were filed against Full Tilt Poker (FTP), PokerStars and Absolute Poker, former FTP CEO Ray Bitar pled guilty on Monday to one charge each of wire fraud and violating the Unlawful Internet Gambling Enforcement Act (UIGEA). As reported by New York-based poker bloggers Dave Behr and Diamond Flush, Bitar appeared in a Manhattan federal court via video link from California, where he is awaiting medical treatment for his heart condition.

Originally facing up to 35 years in prison on nine felony charges, Bitar was sentenced to time served. When his medical condition was revealed a week ago, his attorney John F. Baughman stated that without a heart transplant, Bitar stood only a 50% chance of living to see 2014. US District Judge Loretta Preska referred to Bitar’s dire physical state as the “driving factor” in not sentencing him to any more jail time, saying the federal prison system was “not able to provide the care” Bitar needs, and thus keeping him in prison would be tantamount to a death sentence.

Bitar was also ordered to forfeit $40m in cash, property and other assets purchased with proceeds from FTP’s activities. Prosecutors estimated the amount of Bitar’s forfeiture was close to the sum total of his earnings as FTP’s boss. In making his plea, Bitar told Preska that he regretted his “wrong and illegal” actions, and also claimed to be “sorry for the problems that Full Tilt Poker got into. It never should have happened.”

In the months leading up to Black Friday, FTP’s brain trust made a series of ill-fated decisions to continue crediting player accounts with deposits – and to continue to pay FTP board members $10m per month – despite being unable to ‘pull’ those funds from US financial institutions due to US law enforcement choking off online poker payment processing streams. This created a nine-figure shortfall on FTP’s books that ultimately led to the online poker room’s collapse a few months after Black Friday. The situation was only remedied after PokerStars agreed to acquire FTP and provide funding to pay its former players as part of a settlement of Stars’ own Black Friday civil charges. Former FTP board members Howard Lederer, Chris Ferguson and Rafe Furst have all settled civil charges filed against them in the wake of FTP’s implosion.