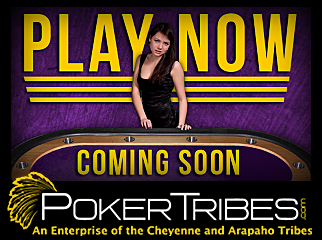 Earlier this week, it was revealed that New Mexico’s Navajo Nation was negotiating a new gaming compact with the state that would effectively prevent either party from launching an online gambling regime. The Navajos operate several brick-and-mortar gaming joints and the idea is to ensure that the revenue generated by these facilities isn’t threatened by state-sanctioned online gambling.

It’s a different story across the border in Oklahoma, where the state has reached an agreement authorizing the Cheyenne & Arapaho Tribes to launch a real-money online gambling site. The tribe, which operates two brick-and-mortar casinos in the state, had launched its PokerTribes.com free-play online casino a couple months back in the belief that it was permitted under the terms of its gaming compact. The state claimed otherwise, talks ensued, and the site was taken offline on Friday. Steve Mullins, general counsel for Gov. Mary Fallin, told The Oklahoman that the matter was “a misunderstanding” that had been resolved with the tribe, who Mullins described as “good partners.”

On Friday, the two parties inked a new compact that will allow the tribe to relaunch the site on a real-money gambling basis, provided they don’t accept customers from the US and the state gets a 20% cut of the proceeds. The homepage says the site will go live this summer on “the web, mobile, iPad, laptop, desktop & apps near you.” In addition to poker, the “real-time, real-money online casino” will feature bingo, blackjack and pull-tabs. PokerTribes.com is powered by Universal Entertainment Group, which is promising its own UEGpoker.com site “coming soon, fall of 2013.”

The two parties also agreed that the “approval of the National Indian Gaming Commission, the Bureau of Indian Affairs and the Department of the Interior may be beneficial, but is not necessary for this Agreement to be in full force and effect.” Brian Foster, Cheyenne & Arapaho CEO and Oklahoma Indian Gaming Association chairman, told CapitolBeatOK he applauded the “dual effort … to open the pathway for international gaming.”

THE END OF ‘BAD ACTOR’ CLAUSES?
With no online gambling regulation likely to emerge at the federal level anytime soon, states and tribes are furiously jockeying for position in the embryonic US market. Rules are being written, erased and rewritten with the aim of ensuring a beneficial position for this or that special interest. Originally, New Jersey’s new online gambling legislation contained a ‘bad actor’ clause similar to Nevada‘s, but New Jersey scrubbed the provision after realizing it would prevent PokerStars from rescuing Atlantic City’s floundering Atlantic Club casino-hotel. Illinois’ pending online gambling legislation started out with the strictest ‘bad actor’ provision to date, but subsequent drafts eliminated the language.

In short, the states are discovering that you can’t enter a rodeo and expect to keep your pearly white Stetson clean all that long. This reexamination of preconceived notions will only continue. As most of the states considering a regulated online gambling market plan to start with online poker, the issue of liquidity will loom large. The need to share traffic will enable larger states to set the tone for what is desirable and/or legally permissible.

Suppose a tribal casino in a large state wants to partner with a technology company that certain Nevada-based casino companies don’t like. Then suppose that tribal casino gets permission to offer services to state residents beyond its tribal borders. Then suppose that state goes shopping for interstate compacts, and other states decide they’re infinitely more interested in that state’s teeming mass of liquidity than whether its technology partners have Nevada’s blessing.

The above scenario is pretty much what Frank Fahrenkopf, the outgoing CEO of the American Gaming Association (AGA), described in his apocalyptic vision of US online poker’s regulatory “race to the bottom.” But if US states and tribes choose to seek out partnerships with companies offering the best technology, then perhaps this ‘race to the bottom’ vision needs inverting.

The AGA has sought to block PokerStars from washing up on the Jersey shore, but its efforts are widely viewed as protectionism designed to benefit its primary funder, Caesars Entertainment. The suggestion of self-interest is reinforced by the AGA’s lack of protest over the pursuit of US gaming deals by Playtech and Bwin.party, companies with similarly ‘grey’ histories. Sooner or later, the big Nevada casino outfits are simply going to have to get used to the idea that there will be a lot of painted ladies at this dance. And some of these other girls will be prettier, better dancers and ‘sure things.’ So best bring your ‘A’ game.