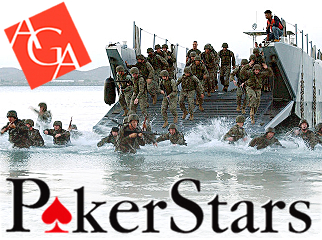 UPDATE: On Tuesday, Forbes’ Nathan Vardi reported that Caesars Entertainment approached PokerStars in February with a potential deal to sell Caesars’ Rio property in Nevada and the World Series of Poker brand. Here’s the money quote Vardi attributed to Stars spokesman Eric Hollresiser: “Caesars Entertainment approached PokerStars and offered to sell us certain assets, such as the Rio Casino in Las Vegas. Caesars suggested that this acquisition would give us a better relationship with Caesars and would help PokerStars gain a license in Nevada. PokerStars declined the offer because we had no plans to acquire another casino in the near term.” Caesars has declined comment on Hollreiser’s claim, but if true, it makes the AGA’s actions detailed below appear even more cynical.

The American Gaming Association (AGA) filed a brief on Monday opposing PokerStars’ bid for a New Jersey gaming license. The US brick and mortar casino lobby group has informed the state Casino Control Commission and the Division of Gaming Enforcement (DGE) that the world’s largest online poker company is “a business built on deceit, chicanery and the systematic flouting of US law.” If the DGE chose to award PokerStars a license, “the integrity of the gaming industry would be gravely compromised.”

PokerStars issued a statement via spox Eric Hollreiser, who said these were matters “for expert regulators to determine, not self-interested partisans picking a public fight.” PokerStars has signed a deal to acquire the struggling Atlantic Club Casino Hotel in Atlantic City and preserve the jobs of some 2,000+ employees. The deal, which would offer PokerStars an entry point into New Jersey’s fledgling online gambling market, is contingent upon getting the regulatory thumbs-up. But the AGA says Stars squandered the right to hold a gaming license due to its continued presence in the US market after the 2006 passage of the Unlawful Internet Gambling Enforcement Act (UIGEA).

The faded Atlantic Club had been on the market for a few years with no offers before PokerStars stepped up. Should the DGE reject Stars’ license bid, the Atlantic Club will go dark. You can look at this two ways. One way would be that the AGA is actively lobbying to put a couple thousand people out of work. Another would be that the AGA truly believes that Stars is a “criminal enterprise” that engages in “chronic lawbreaking.”

But the AGA’s filing – the first time the organization has ever intervened in a licensing process – is more a reflection of just how badly the casino companies and their European tech allies want to keep Stars out of New Jersey and out of the US. The past few years have seen a flurry of new regulated markets in the Euro zone, and wherever Stars has gone, it has crushed the competition. Former Bwin.party co-CEO Jim Ryan liked to talk about the strength of the PartyPoker brand in the US, but Stars’ brand is Hulk strong, especially since last summer’s deal to reunite Full Tilt Poker’s former players with their long-lost deposits. Extremely expensive marketing, but also extremely effective.

The AGA insists that Stars’ $731m settlement with the US Department of Justice last summer – in which the DoJ acknowledged there was no legal impediment to Stars seeking a gaming license – hasn’t “altered in any way” the illegality of Stars’ pre-Black Friday activities, whether by the laws of New Jersey or the regulations of the DGE. And the AGA wants the DGE to be men and not let their decision be “influenced by current economic challenges” at the Atlantic Club or Atlantic City as a whole.

BLOODY FOREIGNERS…
State Sen. Jim Whelan – a key architect of New Jersey’s online gambling legislation – told the Press of Atlantic City the casinos were “motivated by greed. They want to keep foreign investors out.” Whelan was partly responsible for eliminating the legislation’s ‘bad actor’ language, something Whelan says Caesars Entertainment lobbied hard to prevent. “I’m fed up with these guys and their ‘holier than thou’ crap.”

You can’t really blame AGA president Frank Fahrenkopf. He’s officially out the door as of June 30, so he won’t be around to feel the wrath if the DGE rejects Stars’ bid and the Atlantic Club folds. You also can’t blame the casino companies. Caesars and MGM Resorts have at least two things in common: operations in Atlantic City and red ink on their balance sheets.

In Caesars’ case, the debts have been kept well apart from Caesars Interactive Entertainment (CIE), the online gambling subsidiary whose revenues are a closely guarded secret. Caesars is expected to spin CIE into a distinct entity to flog on the open market and thus allow some of Caesars’ long-suffering shareholders to cash out while the cashing is good. But before they can put lipstick on that pig, CIE needs to make a good showing in the New Jersey market.

The casino companies have sold online gambling as a possible solution to their financial woes. Woe to them if Stars gets in, claims half the online poker market overnight leaving everybody else fighting long, hard and very expensively for single-digit shares. The AGA’s attack is unwarranted, but understandable. In 1944, Dwight Eisenhower knew that if he could establish a beachhead on French soil, the German army’s fate was sealed. The AGA is determined to halt PokerStars’ invasion of the US mainland at the water’s edge.