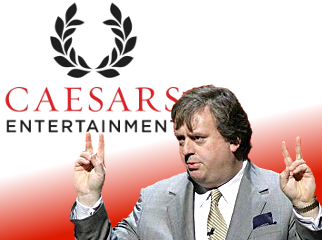 Troubled US casino giant Caesars Entertainment doubled its losses in Q4 2012 after recording significant non-cash impairment charges and having its Atlantic City casinos temporarily shuttered due to Hurricane Sandy. Caesars lost $469.7m in Q4 while overall revenue slipped 4.3% to $2.016b. For 2012 as a whole, revenue was flat (+0.2%) at $8.586b, but the company recorded a net loss of $1.497b compared to last year’s $698.1m loss.

Caesars’ five properties in the Atlantic City region (which includes Harrah’s Philadelphia) saw revenues tumble 19.2% to $334.1m in Q4 after being forced to shut their doors until Sandy passed. The company also ate a $450m non-cash impairment charge “related to the tangible assets of one of the properties in the region.” The result was a $477m operating loss and a 24.2% drop in earnings to $28.8m. For the year, revenue fell 8.6% to $1.68b, resulting in a loss of $394.6m and a 4.5% dip in earnings to $265.6m. Worryingly, the company saw trips to its AC casinos drop 10.2% while spend per trip also fell, albeit by a much smaller margin (0.8%).

Revenues were flat at Caesars’ seven properties in the Louisiana/Mississippi region in Q4, falling just 0.2% to $258.4m, while net income doubled to $48.8m (thanks mainly to reversing $30m in goodwill impairments) and earnings rose 15.2% to $53.9m. For the year, revenues were down a similar percentage to $1.1b, but the region recorded a $222.3m loss thanks to $334.7m in non-cash impairment charges, much of which stemmed from a halted project in Biloxi. Full year earnings rose 7.9% to $248.5m.

Caesars CEO Gary Loveman (pictured above, putting air-quotes around the word ‘profits’) said the company should know by May whether the South Korean government would approve Caesars’ proposal to build a resort-casino near Incheon in conjunction with Indonesian conglomerate Lippo Group and a still unidentified third party. Caesars’ CFO Donald Colvin told analysts on a post-earnings call that the company was holding $2.3b in cash and carrying gross debt of $23.968b.

CAESARS INTERACTIVE TO SAVE THE DAY?
As for Caesars much-ballyhooed Caesars Interactive Entertainment (CIE) division, the company again declined to break out specifics, hiding the numbers generated by the World Series of Poker, the online real-money gambling operations in Europe and social gaming acquisition Playtika within the ‘other’ category. That segment generated revenue of $72.7m (+6.3%) in Q4 and $275.7m (+106.2%) for the year. However, ‘Other’ recorded a net loss of $152.5m for the quarter and $425.1m for the year. Loveman was asked specifically by a CitiGroup analyst if he would disclose Caesars’ margins on its real-money UK gambling operation, to which Loveman provided a one-word answer: “No.”

Caesars continues to hype the idea that a proposed spinoff of CIE would result in a company with lots of opportunities that wouldn’t be “encumbered” by the parent company’s massive debt load. The company was keen to tout the “significant opportunities” CIE might exploit due to the onrush of online gaming regulation at the state-level in the US and Caesars expects to launch real-money online poker in Nevada “in the coming months.” Las Vegas-based Union Gaming Group said Caesars “has been trading more on optionality to online poker then on operating fundamentals, in our view.”

Loveman estimated it would be “somewhere between 18 months and two years” following New Jersey Gov. Chris Christie signing online gaming into law before Caesars would be taking online wagers in the state. Loveman also said he would “certainly be disappointed” if Caesars failed to hold an online gaming market share similar to its proportion of Atlantic City’s brick-and-mortar gaming operations, but much would depend on how many interstate compacts New Jersey can sign on the dotted line.

Loveman said CIE had “two tracks underway” for its poker platform; one dependent on its Nevada agreement with UK operator 888 Holdings, and another based on the Barriere Digital software platform. Loveman anticipates going live in Nevada on the 888 platform, but eventually migrating over to the Barriere Digital platform once Caesars’ boffins have finished tweaking it “to suit the World Series of Poker.”