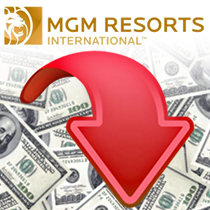 Casino operator MGM Resorts International posted a net loss of $1.2b in Q4 2012, dragged down by a number of significant one-time charges. Revenue was flat at $2.294b, but the company was walloped by several major writedowns, including $366m for undeveloped Las Vegas Strip holdings, $167m for land holdings in Atlantic City and $505m from refinancing a $5b credit facility in December. With the special charges, MGM lost $2.50 per share; minus the charges, the loss was 23 cents per share ($113.7m), or about what it lost in Q4 2011. Expenses also rose 24% to $2.72b, thanks to a 59% rise in corporate expense, over a third of which related to MGM’s development efforts in Massachusetts and Maryland.

Gaming revenues at MGM’s domestic properties rose 1% in Q4, boosted by a 2% bump in slot machine revenue but hindered by a 0.9 point decrease in table game hold. While room revenue rose 2%, guests spent 10% less on entertainment and 4% less on retail purchases during their stays. MGM operates 15 gaming joints in Nevada, Mississippi and Michigan, and has 50% stakes in three other properties in Nevada and Illinois, plus its 50% stake in Atlantic City’s Borgata.

For the year, MGM lost $1.77b compared to net income of $3.11b in 2011. Full-year revenue rose 17% to $9.16b, of which MGM China’s lone Macau casino accounted for $2.8b. MGM CEO Jim Murren called 2012 a “transformational year” for the company and claimed the company was off to a “great start” in 2013. Murren said the one-time charges had resulted in “major improvements in our financial position.” As of Dec. 31, 2012, MGM’s net debt stood at $13.6b but exec VP/CFO/treasurer Dan D’Arrigo said the December refinancing allowed MGM to reduce its annual interest payments by $200m.