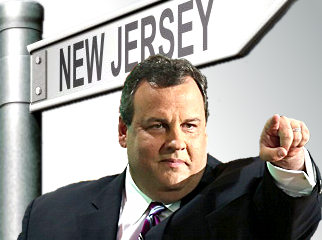 New Jersey Gov. Chris Christie has signed his state’s revised online gambling legislation into law, officially setting up a race between the Garden State and Nevada for US online poker supremacy. Last week, Nevada took less than six hours for its legislators to amend its interactive gaming legislation to permit interstate compacts and for Gov. Brian Sandoval to sign it into law. On Tuesday, New Jersey took even less time for legislators to agree to the revisions Christie had stipulated under his conditional veto earlier this month, and Christie, who happened to be on hand for a scheduled address to a joint session of the legislature, gave the document his official stamp of approval mere minutes after legislators cast their votes.

New Jersey’s state Assembly approved the A2578 bill by a vote of 68-5-1, with the Senate approving their version (S1565) shortly thereafter by a margin of 34-1. Sen. Ray Lesniak, one of the bill’s biggest boosters, gave a speech after the vote describing the legislation as “the best news Atlantic City has heard in years” and jokingly suggested a grateful AC should erect a statue honoring bill sponsor Sen. Jim Whelan. Other legislators joked that Lesniak’s enthusiastic speech had come perilously close (but not quite) to thanking Christie, Lesniak’s traditional nemesis. Christie later stated that he was “confident that we are offering a responsible yet exciting option that will make Atlantic City more competitive while also bringing financial benefits to New Jersey as a whole.”

Christie’s signature makes New Jersey the third state to officially legalize online poker, following the trail blazed by Nevada and Delaware. Both New Jersey and Delaware have authorized a full suite of online gaming products, while Nevada has limited its offering to poker-only. New Jersey’s Division of Gaming Enforcement (DGE) must now set about the complex task of crafting regulations and issuing licenses. Only existing casino license holders will be eligible for online licenses, but partnerships with online operators are allowed, assuming said operators are judged suitable by the DGE and their software passes technical muster.

Under the terms of the law, actual online wagering must begin between 90 days and 270 days of today’s signing, putting a launch date somewhere between the start of June and mid November. Lesniak believes the state will be accepting bets in September, but on Monday, Caesars Entertainment Gary Loveman estimated it could be 18 months to two years before things actually get going. If Nevada is any guide, Loveman’s estimate would seem more rooted in reality, as Nevada’s earliest online poker licensees recently sought and received an extension on the date by which they were supposed to launch.

The battle now commences for the hearts, minds and liquidity of other gaming-friendly states. This month has seen New Jersey and Nevada act with an urgency rarely witnessed in US legislative circles in a bid to become the dominant regulatory hub of a future US interstate online poker network. Lesniak told PokerNews.com that New Jersey needs “to get aggressive in courting other states to hook up with us. I expect the momentum to grow once states see the success we’re having with it in New Jersey.”

Leaving interstate compacts aside for the moment, of the three states to leqalize online poker, New Jersey is by far the best-equipped state to make a go of things on a solo basis. Its population of around 9m is more than twice that of Nevada (2.8m) and Delaware (900k) combined. Also, New Jersey could theoretically rely on an influx of grinders from populous neighboring states like New York and Pennsylvania. New Jersey requires only that wagering take place within state limits, rather than requiring players to establish residency in the state.

New Jersey’s online offering could also be sweetened by the presence of PokerStars. Stars’ proposed takeover of the Atlantic Club casino-hotel is currently awaiting regulatory approval, after which Stars would most assuredly seek an online license. Stars is prohibited from obtaining a Nevada license for at least five years due to that state’s ‘bad actors’ provision. Regardless, the online poker flood gates are officially open in the US of A!