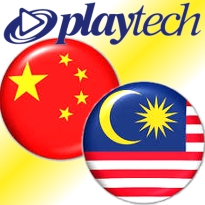 Prior to its move from the Alternative Investment Market to the main London Stock Exchange, online gambling software provider Playtech released a prospectus (viewable here) detailing for the first time the extent of the company’s activities in unregulated Asian markets – specifically China and Malaysia. For the year ending Dec. 31, 2011, Playtech estimated that approximately 3.6% of its gross income was generated via licensees transacting with Chinese punters. Playtech acknowledges that the Chinese authorities take a dim view of online gambling, including activity that supports online gambling, such as payment processing. But “based on advice provided by local legal counsel,” Playtech feels it’s in the clear due to the lack of a physical presence in the country, and thus it “does not conduct any activity within China.” Nevertheless, Playtech concedes that “the enforcement agencies in the territory are unpredictable.”

Activities by licensees serving Malaysian punters is credited with contributing 8.4% of Playtech’s gross income in 2011. Here again, Playtech claims local lawyers suggest there is “some ambiguity” in Malaysian anti-gambling laws, although the country’s Common Gaming House Act contains prohibitions on “those who care for and manage or in any manner assist in the care and management of illegal common gaming houses.” Both the question of whether online gambling falls under the definition of a gaming house or whether these laws would have extraterritorial effect “remains untested.” Again, the main risk is borne by Playtech’s licensees, although any interruption in their activities would obviously impact Playtech’s bottom line.

The final potential danger zone, Germany, accounted for 7.7% of Playtech’s 2011 income, but the imposition of the new federal betting tax and the new interstate gambling treaty could compel “a number” of Playtech’s licensees to exit the market. Playtech’s Merkur Interactive joint venture with local gaming machine maker Gauselmann would not be affected.

While Playtech’s involvement in unregulated Asian markets hasn’t exactly been a secret, this public admission could nonetheless diminish the company’s chances of passing suitability tests by gaming regulators in Nevada, where Playtech has applied for an online poker tech provider license. Gaming Commission members had some pointed questions regarding Playtech’s joint venture relationship with William Hill – and Playtech founder Teddy Sagi’s mid-90s stint in jail for stock manipulation – at Hills’ sports betting license application hearing last month, and promised more probing questions when Hills’ online poker application comes to the top of the pile. Playtech believes such concerns are a non-issue, noting that if it can pass muster with the gatekeepers of the London Stock Exchange, Nevada gaming regulators shouldn’t pose a threat. We’ll see.