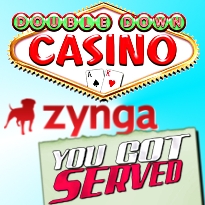 Double Down Casino, the social gaming offshoot of gaming device maker and online poker operator International Game Technology (IGT), inked two deals with US land-based casinos last week; the Casino Del Sol Resort in Arizona, and the Golden Acorn Casino in California. The Las Vegas Review-Journal reports that Double Down will soon add its free-play wares to the websites of Colorado’s Jacobs Entertainment, which runs three Gold Dust West casinos in Nevada. IGT exec VP of global sales Eric Tom told the LVR-J that the announcements of such deals “have generated some interest,” leading to discussions with around 20 other companies looking for similar partnerships. Tom says the idea is to capitalize on the addition of IGT slots titles to Double Down’s offering by having the casino visitor do a double-take when they see a familiar online game in a real-world form. “We want to give the player reasons to play the game in an actual casino setting.”

While critics have complained that the rapid spread of social gaming is creating a generation of pubescent gambling addicts just itching to reach the age of majority so they can blow their student loan payments at casinos, Double Down president Glenn Walcott isn’t having it. Following last week’s Casual Connect games confab in Seattle, Walcott told GameZebo that he didn’t believe social casino games had much appeal to youth in the first place. Kids weren’t seeking out the “escapism” that social casino games provide, opting instead for “more the kind of experience a Disney game can offer them … they want to live in a world of fantastical characters … [social casino games] mechanics aren’t interesting to them.”

Escape may have been what Zynga execs felt like doing last week as they watched their stock price set new record lows with each passing day. But Zynga appears to have bottomed out – plateaued, at the very least – posting a modest two-cent gain on Friday to close at $2.72. The feat is all the more impressive given that Zynga was hit with a copyright infringement lawsuit on Friday by Electronic Arts over claims that Zynga’s CityVille is a pale imitation of EA’s Sims Social. An EA blog post accompanying the suit noted that the EA “isn’t the first studio to claim that Zynga copied its creative product. But we are the studio that has the financial and corporate resources to stand up and do something about it.” Zynga issued a statement denying any infringement, stating that EA had displayed “a lack of understanding of basic copyright principles.” The suit came right after EA’s COO publicly dissed Zynga for putting all its eggs in Facebook’s basket, and hot on the heels of class-action lawsuits filed by angry investors convinced that Zynga execs failed to disclose the company’s lackluster financial performance while simultaneously dumping millions of shares before they tanked.