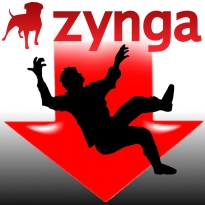 Mark Pincus, CEO of social games developer Zynga says his company intends to launch a real-money gambling product – presumably including its popular Texas HoldEm Poker game – in the first six months of 2013. Pincus made the announcement on a conference call with analysts following the release of the company’s second quarter financial report card. “What we’ve said, and what we have to announce today, is that we have our first products in development and that we intend to release them in markets that are regulated and open, subject to our getting licensing.” As usual, Pincus was cagey on the details, a stance that has led some critics to suggest the real-money poker claims are just chimeras Pincus trots out whenever he needs to bolster Zynga’s sagging stock price.

After closing out the day at $5.07, Zynga shares fell as much as $2 (40%) in after-hours trading, leaving them clinging to just 30% of the December IPO price. While analysts hadn’t expected sunshine and lollipops, Sterne Agee’s Arvind Bhatia suggested “it’s looking more and more like this was a fad, because they’ve introduced so many new games, yet EBITDA continues to come down. [Zynga] has been saying for some time that declining traffic doesn’t matter and clearly it does. The decline in some of their top games in traffic has been huge.”

According to AppData, Zynga mainstays like FarmVille, CityVille and CastleVille have each lost over 20% of their user base since Q1. Pincus blamed “a more challenging environment on the Facebook web platform” that favored new games at the expense of old ones. Pincus stressed his company’s need to diversify away from Facebook and into mobile, but admitted that the mobile market remains “fragmented.” Facebook, which reports its own results on Thursday and which depends on Zynga for 15% of its revenue, experienced some collateral damage from Zynga’s report: Facebook shares slipped nearly 10% in after-hours trading. Damn dog…