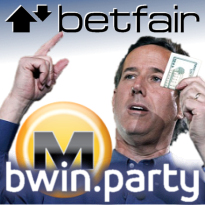 Paddy Power are offering props on just how much havoc Guns N’ Roses will wreak when the band returns to Dublin this May. The last time the Gunners were in town, frontman/plastic-surgery-casualty Axl Rose took the stage 40 min. late and left after just four songs, chased off amid a shower of bottles hurled by the wound up crowd. Paddy’s offering various markets on the show, including the precise time the band takes the stage to how long their set will last. You can even wager on whether or not the gig gets cancelled ahead of time due to poor ticket sales or ‘the band’ getting a sudden case of bottle-phobia.

Axl is an unpredictable wack-a-doo, so these are tough markets to read. But hey, maybe you’ll get lucky and Paddy Power will pay out in advance, like they did on the US Republican presidential nomination. That far-right bitch-fight has provided no shortage of drama – like the state of Iowa giving Mitt Romney the victory over Rick “don’t google me” Santorum by eight votes, then changing their mind two weeks later and declaring Santorum the victor by a spread of 34 votes. Punters who had backed the deeply religious Santorum rejoiced at this miracle and demanded that bookmakers make with the money. Ladbrokes, William Hill and Bet365 paid out, but Betfair, according to the Telegraph, went rogue, rejecting the claim that the Santorum sourpusses were owed anything. However, like St. Paul on the road to Damascus, the betting exchange appears to have seen the light. Some 10 days after Iowa’s switcheroo, a Betfair spokesman announced that the betting exchange is “looking into it.” Amen, brother…

Just when you thought the Telegraph had put down it’s spanking paddle, the paper figured PartyGaming had a lotta splainin’ to do over its multi-million dollar dealings with Megaupload.com, the file-sharing site recently shut down by the US Department of Justice. PartyGaming was listed in the indictment as supplying about 1/8 of Megaupload’s total advertising revenue. The relationship between Party and (what the DoJ referred to as) the ‘Mega Conspiracy’ began in November 2009 and continued right up to the day the site was taken offline.

Bwin.party director of communications John Shepherd told the Telegraph that the company was “a completely innocent party” with “no knowledge about any of the alleged activities undertaken by Megaupload.” Shepherd pointed to the clause in its contract requiring vendors like Megaupload to ensure their sites’ content doesn’t infringe the Intellectual Property Rights of any third party. Shepherd knew not why the DoJ had chosen to single out his employers in the indictment, especially since the $3m deal amounted to just “part of one per cent” of Bwin.party’s annual marketing spend. Heat that, ladies? It’s bloody enormous. There’s a bwin.party in our pants and you’re all invited! Meanwhile, check out the video of Shepherd’s press conference: