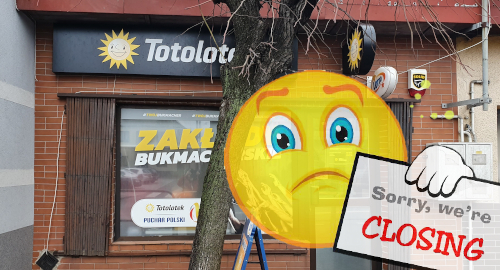 Polish bookmaker Totolotek SA is closing its retail betting operations, while the country’s latest online betting licensee is raising eyebrows due to its ties to a ‘rogue’ international operator.

Totolotek recently announced that it would close its 116 retail betting points of sale in Poland effective March 31. The move was prompted by the pandemic’s impact on retail operations of all kinds and the resulting migration of retail bettors to Totolotek’s Polish-licensed online betting site.

The retail closure will result in the redundancy of around 150 staff, to whom Totolotek is promising support in finding new employment. Totolotek, which is owned by a joint venture involving the Gauselmann Group’s Merkur Sportwetten subsidiary, says retail betting customers will have 90 days in which to collect on pending wagers that ultimately prove to be winners.

Meanwhile, local media reported that Poland’s Ministry of Finance had granted regulatory approval to the country’s 20th licensed betting operator, Bukmacherska Sp. z o.o, which will operate in Poland using the Fuksiarz brand. The company, which was established in May 2019, is reportedly backed by several individuals with past and present ties to major European gambling operators.

Bukmacherska’s board of directors includes Betsson’s current CEO Pontus Lindwall. Unlike Betclic, Betsson has so far declined to apply for a Polish license and Betsson-related domains are a regular fixture on the Ministry of Finance’s blacklist of online gambling operators serving the Polish market without the Ministry’s permission.

In fact, three more Betsson-related domains were added to the blacklist just last week. The latest additions add the number ‘28’ to the usual Betsson domain, indicating the number of times the company’s operations have been tagged with Poland’s scarlet letter. (The ‘27’ versions were blacklisted on December 29, 2020.)

Other Betsson brands, including Betsafe, also regularly appear on the blacklist (the digits appended to Betsafe’s most recent appearances are ‘63’). Betsson’s Casino Euro brand last made the blacklist on January 11 (edition ‘35’).

Naturally, Bukmacherska’s links to Betsson have irked certain locals, leading to media queries as to why the Ministry of Finance appears unperturbed by the involvement of Betsson’s boss. The Ministry responded by saying only that every betting operator that comes in from the unauthorized cold “will cause the shadow economy in this industry to shrink,” thereby fulfilling the goals of Poland’s online betting laws.