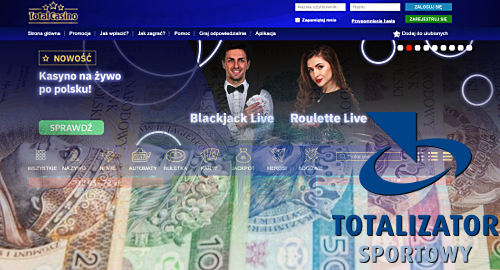 On Monday, Totalizator Sportowy offered a snapshot of its 2019 performance, during which total sales topped PLN10.9b (US$2.59b), up from PLN6.1b in 2018 and a new all-time high for the company.

Totalizator Sportowy launched its Playtech-powered online casino Total Casino in December 2018 but the company didn’t provide any specific sales totals in its 2019 report, other than to say the site’s players had “made over 1.3 billion spins” by the end of 2019. One of those spins resulted in a customer winning PLN759k ($180k), which currently stands as the highest prize the site has issued.

On the site’s first birthday, Totalizator Sportowy said it expected its online casino to generate sales of PLN3.8b, which would work out to around 35% of 2019’s official total. The company said Monday that Total Casino and its sister site Lotto.pl had registered over 320k customers, the same figure the company reported in December.

Total Casino launched its first live dealer product courtesy of Playtech a month ago, starting slowly with a couple blackjack tables and one roulette table.

One month ago, Totalizator Sportowy reported that it had donated nearly PLN10m to the country’s fight against the COVID-19 pandemic. In late March, the company announced that 10% of Lotto.pl sales would go toward anti-pandemic efforts.

On March 15, Totalizator Sportowy announced that it was shutting all 200-odd retail slots operations to minimize further COVID-19 transmission. However, the company opted to maintain most of its retail lottery operations after vowing to increase ‘security measures’ to protect both customers and staff.

Totalizator Sportowy has yet to indicate when its retail operations might reopen but some private Polish bookmakers began reopening their retail operations last week, including local betting giant STS, which reopened 440 betting shops that were closed on March 15.

Meanwhile, Poland’s blacklist of unauthorized online gambling domains continues to grow, having recently surpassed the 10k mark, up from around 7k at this point last year. As always, sketchy Curacao-licensed sites make up the bulk of new additions, although Denmark’s state-run Danske Spil and Italy’s Betaland also made a few appearances.